Lecturer visits Africa to see fruit of his labours

A retired University of Manchester lecturer has returned to East Africa to see the skills of two of his former students put to good use. 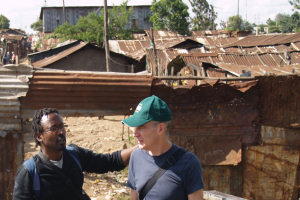 Dr Pete Mann, who is an Honorary Fellow at the University’s Centre for Organisations in Development, is the only non UN official to act as a mentor for a UN programme to train mission-support personnel in peacekeeping operations.

The scheme, which is held three times a year, was devised by his former MSc student Heather Langdon and took place in its third year for the first time at the new UN logistics base in Entebbe, Uganda.

Dr Mann also paid a visit to Kenya to his former student Sammy Gitau – whose story hit the international headlines in December 2007 when he graduated from the University.

The former Kenyan slum child found a University of Manchester prospectus leaflet in a dustbin and after a monumental struggle achieved his goal of an MSc in the 'Management and Implementation of Development Projects' programme.

Sammy continues to work with the local resource centre he helped found in Mathare slum outside Nairobi.

He also works with an NGO mediating ethnic tensions arising between communities in the Nairobi slums.

The American born academic spent four years in East Africa, leaving for Manchester in 1974 to spend30 years with the University’s world famous Institute for Development Policy and Management (IDPM) from 1981.

She studied on the MSc distance learning programme while working with UN Peacekeeping operations in the Congo and Sudan.

Dr Mann said: “It’s humbling to be in the shadows of people you’ve taught who retain deep commitment to integrity and decency in the face of overwhelmingly adverse circumstances.

“And it’s gratifying to know the University is playing its part internationally in re-affirming and underpinning those values.

“Heather Langdon has learnt many subtle crafts in her outstanding career with the UN, for example, monitoring performance standards across cultures.

“She cannot only apply principles of contemporary management within contexts where these processes are not used or relied upon but also help others learn these skills.

He added: “Sammy Gitau also knows the delicate art of purposeful negotiating, as between groups locked out of contact with each other.

“He has persuaded local youth that rather than kill the other they might risk engaging with them.”