Flying into the eye of the storm

University of Manchester scientists flew into the middle of the violent storms battering Scotland yesterday to measure the huge impact of the winds. 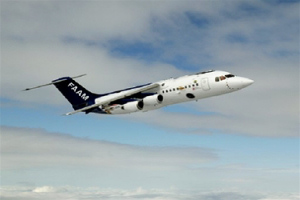 Atmospheric scientist Dr Keith Bower was on the Facility for Airborne Atmospheric Measurements (FAAM) research aircraft, while Professor Geraint Vaughan was monitoring measurements from the ground.

Both are part of the DIAMET project, a consortium led by The University of Manchester, the Natural Environment Research Council and the Met Office to look at ways of continually improving the ability to forecast high-impact weather.

The flight used specialist instruments to measure the winds, temperature and humidity, and cloud particles, in the eye of the storm.

The aircraft is also able to drop small instrument packages through the storm to measure profiles of wind, temperature and humidity. The data from these instruments was relayed back to Exeter by satellite link and used in producing the next forecast.

Yesterday it flew from Exeter north to Stornoway before sampling the south-west region of the storm, west of Scotland. Then after refuelling in Teesside it measured the storm again over Eastern Scotland.

Larger-scale storm systems that may be forecast well, typically contain localised regions of particularly severe weather, that are much harder to forecast accurately. These smaller regions, where much of the storm damage is often concentrated, are much more difficult to forecast than the storm itself, especially more than a day ahead.

Professor Vaughan, from the School of Earth Atmospheric and Environmental Sciences at the University of Manchester who leads DIAMET, said: “Our study of today’s storm will be a major opportunity to improve forecasts of violent wind events.

“This storm was of a type known as a ‘sting jet’, named because the cloud band observed by satellite resembles a scorpion’s tail, with the highest winds at the tip of the tail.

“This case gives us excellent data to take forward the research we have doing at Manchester into the dynamics of these storms.