A collection of poetry by a creative writing lecturer based at The University of Manchester has been named as one of the top five books of 2011 by a group of top writers in the Irish Times. 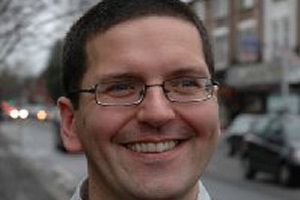 Of All Places by co-Director of the Centre for New Writing John McAuliffe, published in July, received the accolade following rave reviews of the book.

Toibin is Professor of Creative Writing at the Centre for New writing working alongside Dr McAuliffe.

John McAuliffe published his first collection of poems, A Better Life (Gallery), in 2002, which received a major bursary from the Irish Arts Council and was shortlisted for the Forward First Collection Award.

His second collection Next Door was published in June 2007, and he has also published poems in the TLS, Poetry Ireland Review, the Manchester Review, PN Review, Poetry London and Poetry Review.

He was programme director of Ireland's biggest poetry festival, Poetry Now, at Dun Laoghaire until 2007, and is a contributing editor to the journal Metre.

“It confirms the growing international prestige of the Creative Writing programme at Manchester, and is a testament to John’s gifts as a writer.”