The University of Manchester is leading a £2.7m research project to create a key component in reducing jet engine emissions. 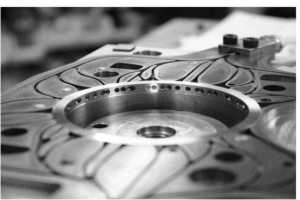 Together with academic and commercial partners including the Universities of Southampton and Strathclyde, Rolls-Royce, Shell, Covesion, Fianium and OptoSci, Manchester academics will lead the four-year study focussing on carbon dioxide emissions and how they can be lowered.

The Manchester researchers, based in the School of Electrical and Electronic Engineering, aim to produce the first-ever images of the distribution of chemical species in aero-engine exhaust plumes. They will use novel fibre lasers developed at the University of Southampton and new electronic architectures for spectroscopic measurement from the University of Strathclyde.

FLITES will build upon the expertise of engineers at the University who have already used tomographic imaging to view fuel in automotive engine combustion chambers.

The FLITES team has been awarded £1.8m by EPSRC, with the companies providing more than £500,000 in support.

It is expected that the research project will enhance turbine-related research and development capacity in both academia and industry by opening up access to exhaust plume chemistry.

It will underpin a new phase of low-net-carbon development that is underway in aviation, based on bio-derived fuels, and which entails extensive research in turbine engineering, turbine combustion, and fuel product formulation.

Professor Hugh McCann, who is leading the project, said: “There has never been any research using turbine emissions data to determine the condition and behaviour of internal engine components, especially the combustor”.

“FLITES will open a new door to penetrate the complex phenomena that dictate the performance and limitations of advanced aero engines, and will help to really pin down the performance benefits of novel biofuels.”