The University of Manchester’s Dalton Nuclear Institute, comprising around 100 academic staff and more than 300 research staff and students, has been announced as a winner of the Queen's Anniversary Prizes for Further and Higher Education. 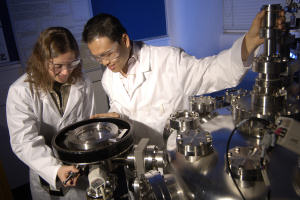 The announcement was made by the Royal Anniversary Trust, by kind permission of Her Majesty The Queen, at a reception at St James's Palace on the 24 November.  The Prizes recognise and celebrate the outstanding work within UK Higher and Further Education Institutions and the impact that they have on society.

They are the UK's most prestigious form of national recognition open to a UK academic or vocational institution. The winning entries range from individual departments or research groups, to major international development projects to community schemes and cutting-edge research.

The University of Manchester’s Dalton Nuclear Institute provides world-leading applied research to support government, regulators and industry in the delivery of safe and secure nuclear energy, both in the UK and globally.

The University’s leading academics, under the direction of the Dalton Nuclear Institute, also provide a wide range of education programmes across all civil nuclear fields to both full-time and part-time students to ensure that the UK has the required skilled workforce to address the future challenges facing the sector.

The close links established with the nuclear industry, both in the UK and overseas, ensures that research and education programmes address to the real nuclear issues, and that the skills are taken up by the industry.

The University’s staff also deliver various public programmes to engage children, equip teachers, and improve public understanding of nuclear technology.  To-date, more than 16,000 children and 100 teachers have been involved in the nuclear awareness programmes.  In addition, this year staff provided definitive advice and comment on the nuclear incident at Fukushima to Government, industry and the international media, as well as to the general public.

Professor Colin Bailey, Vice-President and Dean of the Faculty of Engineering and Physical Sciences at The University of Manchester, said: “We are delighted to be awarded the Diamond Jubilee Queen’s Anniversary Prize, which is great recognition of the work carried out by our world-leading staff and the leadership provided by the Nuclear Institute’s Director Professor Andrew Sherry”.

Manchester has a long tradition in nuclear research and education, with John Dalton presenting his atomic theory to the Manchester Literary and Philosophical Society just over 200 years ago.

Dalton Nuclear Institute Director Professor Andrew Sherry was delighted to have received the award. He said: “It’s an honour to receive the award on behalf of the all the academic and support staff, researchers and students at the University working and studying in the area of civil nuclear.

“The Dalton Nuclear Institute is globally renowned for its excellent applied research and education, which is recognised by the Queen’s Anniversary Prize.”

“It is a fantastic testament to the world-leading research carried out under the direction of The Dalton Nuclear Institute and the expertise and professionalism of all staff associated with this award.”

This includes review by national and international experts and specialists covering the relevant disciplines, reference to government departments and UK devolved governments with a particular interest in the fields of work under consideration and to professional and other bodies and sources. Entries from universities and colleges in the UK are also assessed by the Awards Council of the Trust.

The 'Diamond Jubilee' (ninth) round presentations, to representatives from the winning institutions, will be made in February 2012 by Her Majesty The Queen at a Buckingham Palace honours ceremony.