Burns app could save lives at the touch of a button

A former soldier has developed an app which could save the lives of burns victims, both in combat and in hospitals around the world. 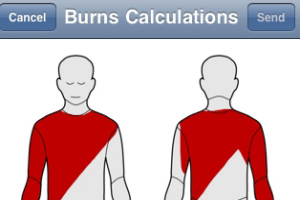 Chris Seaton, formerly a captain in the Royal Army Medical Corps and now a PhD student studying Computer Science at The University of Manchester, created the easy-to-use iPhone and iPad application after seeing the horrific injuries burns caused to fellow soldiers.

Chris, who carried out the research alongside Mr Rowan Pritchard Jones and Professor Paul McArthur, plastic surgeons at St Helens and Knowsley NHS Trust and academics at the University of Liverpool, has produced research which dramatically reduces the possibility of errors in treating burns victims, which can save lives and prevent severe disfigurement.

The research won a £5,000 prize at the NHS North West Health Innovation and Education Cluster Excellence in Innovation Awards 2011 this month.

Critical to the chances of survival after a burns injury is taking on the correct amount of fluids. Traditionally, doctors will have to make a quick series of pen and paper calculations to assess the ideal amount.

The margin for error on doing this is high, and is also time consuming. The app – called Mersey Burns – allows for exact and rapid calculations.

On a touchscreen phone, the user simply colours in the sufferer’s burnt area on a computer model of a torso, adds in the person’s age and weight (estimated if not exactly known), and the precise amounts of fluids are instantly calculated.

Because it can be used on a phone, the calculations can be made anywhere, but people can also ring a doctor who can use the app to generate the result. Soldiers without a medic nearby in combat zones could use the app themselves or contact the nearest doctor.

Tests the research team carried out showed the iPhone app reduced errors made by pen and paper by a third.

In the army for four years, including a seven-month tour in Afghanistan, as well as deployments in Kenya, Canada and all over the UK, Chris was keen to develop the research after seeing horrific burns injuries sustained by others.

He said: "There is great possibility for creating really innovative technology by pairing up small touch screen devices with medicine.

“Even simple ideas can make a big difference and all it takes is a doctor getting together with a computer scientist to make it a reality."

The app was awarded a £5,000 prize at the NHS North West HIEC (Health Innovation and Education Cluster) Excellence in Innovation Awards 2011.

Rowan Pritchard Jones, the clinician on the project, said: “Mersey Burns makes the prescription of fluids to burns patients more accurate and less time consuming and it uses the touchscreen phone technology that most physicians already carry around in their pockets."