Handover of the Dalton Cumbrian Facility to The University of Manchester

The University of Manchester has taken ownership of a new world-class nuclear research centre in West Cumbria from the Principal Contractor, Morgan Sindall. 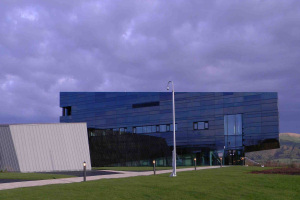 The Dalton Cumbrian Facility is a new research base for The University of Manchester’s Dalton Nuclear Institute and is the result of an initial £20m joint investment by the University and the Nuclear Decommissioning Authority (NDA).

Construction is now complete on The Dalton Cumbrian Facility (DCF),situated on the Westlakes Science and Technology Park, near Whitehaven, and will bring world-leading academic research to West Cumbria.

DCF will add to the growing research, education and skills infrastructure in West Cumbria, key elements in the Britain’s Energy Coast programme that is designed to build on West Cumbria’s world-leading capability in the nuclear industry to deliver diverse and sustained economic wellbeing for the area.

Research at DCF will focus primarily on the areas of radiation science, radiochemistry, nuclear engineering decommissioning and the management of radioactive waste. The facility will become fully functional during 2012 following delivery and commissioning of a particle accelerator, the largest and most complex research equipment to be housed at DCF.

Once fully operational DCF will house around 50 post-doctoral and PhD researchers, academic lecturers and operating personnel and is expected to attract leading UK and overseas academics to carry out research and deliver lectures in West Cumbria.

Through DCF the University has unique academic access to the National Nuclear Laboratory’s extensive R&D and engineering facilities, at the Central Laboratory, situated on the Sellafield site, and at Workington. This academic access is vital to support full lifecycle development and deployment of innovative technologies.

The Principal Contractor for the construction of DCF was Morgan Sindall. Property consultants Drivers Jonas Deloitte project managed the construction phase. Wilson Mason Architects designed DCF. The value of the main construction contract was £4.8m and around £2.2m of this was spent on local contractors and suppliers.

Copeland MP Jamie Reed said “This is the second major piece of good news in West Cumbria in recent weeks.

“The handover of the Dalton Cumbrian Facility to The University of Manchester along with the positive announcement on the Energy Coast Regional Growth Fund bid are very practical demonstrations of how we as partners are developing our educational and skills base to meet the future economic needs of the area.

“I look forward to the DCF becoming fully operational in 2012”

Professor Andrew Sherry, Director of the Dalton Nuclear Institute, said: ‘The University of Manchester's Dalton Cumbrian Facility will integrate with other facilities in the North of England to establish a truly unique and world-leading capability.

“Working closely with the NNL and other nuclear stakeholders, the DCF will create a seamless team of academic researchers and industrial
experts to ensure that transformational research, and the development and deployment of technologies, addresses the most challenging nuclear issuesʼ.

John Clarke, the NDA’s Executive Director for Business Planning and Britain’s Energy Coast Board member: “The need for a world class nuclear research centre was a key part of the NDA’s skills strategy.

“Locating the DCF here in West Cumbria close to other key facilities such as the National Nuclear Laboratory and Energus will provide an overall package of education and skills excellence that will both support the NDA’s clean up mission and the broader development of the local economy.”