A fascinating series of ‘thought’ garlands reflecting observations of how people spend their time in the John Rylands Library have been created by Indian artist N.S. Harsha. 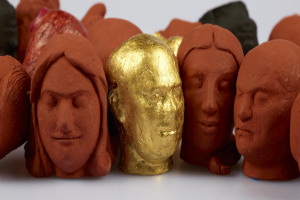 Commissioned specifically by the Library for Asia Triennial Manchester 2011, in consultation with Alnoor Mitha, Director of Shisha and Artistic Director of ATM, visitors to the Rylands are invited to wear and use the garlands for inspiration during their visit.

In wearing the Thought Mala, Harsha intends to transform the Library into a spiritual place full of ritual, as visitors borrow the garlands as they would a book - wearing them, handling them or simply contemplating them - as they explore the gothic splendour of the Library or work in the reading rooms.

Rachel Beckett, Head of Special Collections at the John Rylands Library, said:
“With this fascinating artwork N.S. Harsha has brilliantly captured the Library’s passion for inspiring readers and visitors to engage with our amazing collections and extraordinary building in new and exciting ways.  Harsha’s intellectual curiosity and artistic vision are an inspiration, and we are delighted to have had the opportunity to work with such a talented and respected artist.”

Born in 1969, N.S. Harsha lives and works in Mysore, India. Harsha was the recipient of the prestigious Artes Mundi 3 Prize in 2008 and has taken part in a variety of collaborative projects and exhibitions internationally. Most recently, he has shown work at Liverpool Biennial (2010), the 26th Sao Paulo Bienal (2010), Herning Art Museum, Denmark (2010) and Musée d’Art Contemporain, Lyon, France (2011). He is represented in the UK by Victoria Miro Gallery London - www.victoria-miro.com