For the second year running, a University of Manchester graduate has been named as the best Chemical Engineering student in the country. 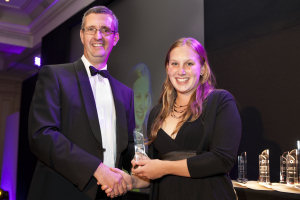 Rachel Perry, 23, a 2011 graduate of the School of Chemical Engineering and Analytical Science, has won the prestigious AWE award.

Her success was announced at the Science, Engineering and Technology (SET) Awards in a ceremony held at the Millennium Hotel, Grovesnor Square, London on September 23rd.  This follows in the wake of Dyfan Williams’ success in 2010.

The SET Awards are Europe's most important awards for science and engineering undergraduates.

The project is an effective and affordable process for purifying biobutanol, producing a marketable renewable transport fuel.

Optimising the separation sequence, coupled with detailed design of the distillation columns, led to a cost effective, inherently safe and environmentally aware process which outputs five tonnes per day of 99.8 % pure biobutanol.

This award adds to an impressive list of achievements – Rachel’s high level of attainment has already been recognised by:
•    The Shell Scholarship for being one of the highest qualified students on entry;
•    The BP Book Prize in Year 1;
•    The Crosfield Prize in Year 2 for the best overall performance in design and laboratory work;
•    The Course Prize in her 3rd and 4th Year;
•    Graduating with 1st class honours in MEng Chemical Engineering with Industrial Experience from The University of Manchester.

Of her success Rachel, who is currently working as a graduate process engineer at the ExxonMobil Fawley refinery (near Southampton), said: “I'm indebted to everyone who supported and assisted me throughout my degree, both the staff and my fellow students.

“I am honoured to have received this award and I hope I will go on to make The University of Manchester proud”.

Professor Mavituna, who nominated Rachel for the award, said: “Rachel’s individual design project on the purification stages of a Biobutanol process showed her excellent analytical and synthetic skills and went above and beyond what we expected.

“It is an excellent example of a design project achieved only by the best students. Rachel displays all the qualities needed to become a highly-successful engineer”.

“She was an exceptional student – as reiterated by the judges – and a delight to work with.  She’s an excellent role model for all our students – we wish her every success with what is a very promising career.”