Astronomers have produced the best ever image of a colossal yellow hypergiant star – one of the rarest types of star in the Universe. 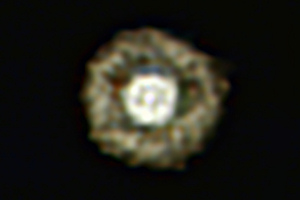 Using the European Southern Observatory’s Very Large Telescope (VLT), teams from The University of Manchester, among others, took the new picture showing for the first time a huge dusty double shell surrounding the central hypergiant.

The star and its shells resemble an egg white around a yolky centre, leading the astronomers to nickname the object the Fried Egg Nebula.  The international team’s results are published in the journal Astronomy & Astrophysics.

The monster star, known to astronomers as IRAS 17163-3907, has a diameter about a thousand times bigger than our Sun. At a distance of about 13 000 light-years from Earth, it is the closest yellow hypergiant found to date and new observations show it shines some 500 000 times more brightly than the Sun.

The observations of the star and the discovery of its surrounding shells were made using the VISIR infrared camera on the VLT. The pictures are the first of this object to clearly show the material around it and reveal two almost perfectly spherical shells.

If the Fried Egg Nebula were placed in the centre of the Solar System, the Earth would lie deep within the star itself and the planet Jupiter would be orbiting just above its surface.

The much larger surrounding nebula would engulf all the planets and dwarf planets and even some of the comets that orbit far beyond the orbit of Neptune. The outer shell has a radius of 10 000 times the distance from the Earth to the Sun.

“This object was known to glow brightly in the infrared but, surprisingly, nobody had identified it as a yellow hypergiant before,” said Eric Lagadec (European Southern Observatory), who led the team that produced the new discovery.

Yellow hypergiants are in an extremely volatile phase of their evolution, undergoing a series of explosive events — this star has ejected four times the mass of the Sun in just a few hundred years. The material flung out during these bursts has formed the extensive double shell of the nebula, which is made of dust rich in silicates and surrounded by gas.

Professor Albert Zijlstra, from The University of Manchester, said: "It is amazing that one of the brightest stars in the infrared sky had previously gone unnoticed. We are seeing a very rare event, when a star is beginning to blow off its outer layers, as a prelude to its final explosion as a supernova."

This activity also shows that the star is likely to soon die an explosive death — it will be one of the next supernova explosions in our galaxy. Supernovae provide much-needed chemicals to the surrounding interstellar environment and the resulting shock waves can kick start the formation of new stars.

The name IRAS 17163-3907 indicates that the object was first spotted as an infrared source by the IRAS satellite in 1983 and the numbers show the star’s place in the sky, in the heart of the Milky Way in the constellation of Scorpius (The Scorpion).

IRAS 17163-3907 is one of the 30 brightest stars in the infrared sky, at the wavelength of 12 microns observed by IRAS, but it had been overlooked because it is quite faint in the visible. The total mass of this star is estimated to be roughly twenty times that of the Sun.

After burning all their hydrogen, all stars of ten solar masses or more become red supergiants. This phase ends when the star has finished burning all of its helium. Some of these high-mass stars then spend just a few million years in the post-red supergiant phase as yellow hypergiants, a relatively short time in the life of a star, before rapidly evolving into another unusual type of star called a luminous blue variable. These hot and brilliant stars are continuously varying in brightness and are losing matter due to the strong stellar winds they expel. But this is not the end of the star’s evolutionary adventure, as it may next become a different kind of unstable star known as a Wolf-Rayet star before ending its life as a violent supernova explosion.

ESO, the European Southern Observatory, is the foremost intergovernmental astronomy organisation in Europe and the world’s most productive astronomical observatory. It is supported by 15 countries: Austria, Belgium, Brazil, the Czech Republic, Denmark, France, Finland, Germany, Italy, the Netherlands, Portugal, Spain, Sweden, Switzerland and the United Kingdom.

At Paranal, ESO operates the Very Large Telescope, the world’s most advanced visible-light astronomical observatory and two survey telescopes. VISTA works in the infrared and is the world’s largest survey telescope and the VLT Survey Telescope is the largest telescope designed to exclusively survey the skies in visible light. ESO is the European partner of a revolutionary astronomical telescope ALMA, the largest astronomical project in existence. ESO is currently planning a 40-metre-class European Extremely Large optical/near-infrared Telescope, the E-ELT, which will become “the world’s biggest eye on the sky”.