A selection from what has been identified by a University of Manchester academic as the only surviving Chartist hymn book is to be performed in public for the first time since 1854. 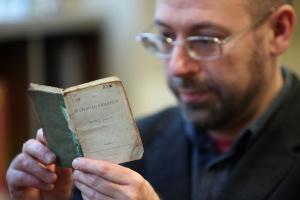 The concert, performed by Calder Valley choir Corista, will take place at the people’s History Museum in Manchester on 24 September where Dr Sanders will also give a talk about the find.

The event marks the anniversary of the Great Chartist Meeting at Kersal Moor on 24 September 1838.

According to Dr Sanders, Chartist hymn books were designed for the movement in an attempt to produce their equivalent of the standard Hymn book:  'Hymns Ancient & Modern'.

While Chartist historians know of two earlier attempts to produce a hymn book for the whole movement - Cooper's 'Shakespearean Chartist Hymn Book' and Hobson's 'Hymns for Worship' -  this collection has not been discussed before.

Heavily influenced by dissenting Christianity, the hymns are about social justice, ‘striking down evil doers’ and blessing Chartist enterprises, rather than the conventional themes of crucifixion, heaven and family.

“The hymns have been set to tunes that we know to have been popular in the early 19th century by Corista.

“So it's the first time in well over a century and a half that these hymns have been heard - perhaps even the first time they've been performed publicly since Dickens heard one of them in 1854,” said the literary scholar based at the University’s School of Arts, Histories and Cultures.

He added: “This fragile pamphlet is an amazing find and opens up a whole new understanding of Chartism -  which as a movement in many ways shaped the Britain we know today.

“It’s pretty rare – even the British Library doesn't have a copy.

“What is so fascinating is that hymn-singing was not the best known feature of Chartism.”

Three items in the Chartist newspaper the Northern Star - tracked down by Dr Sanders - helped him confirm the origins of the find.

One, from January 1845, asked for readers to send ideas for a Chartist hymn to an address in Manchester.

According to Dr Sanders, in the early Victorian period there were no set tunes for particular hymns.  Instead, local congregations would choose a tune to fit the beat of the lyrics.

Although the hymn book doesn't identify tunes for the hymns, it does give their metrical patterns and with more detective work, Dr Sanders indentified the kinds of tune to which the words would have been sung.

Working with local choir Corista, he has set the hymns to hymn tunes popular in the period.

The hymns:
'Great God is this the patriot's doom?' - a hymn composed by the prolific Leicestershire Chartist hymn writer, John Henry Bramwich, for the funeral of the Chartist martyr Samuel Holberry.

'Assembled 'neath thy broad blue sky' -  composer unknown and was heard by Charles Dickens during his visit to Preston in 1854.

'Britannia's Sons, though slaves ye be' - another hymn by John Henry Bramwich and thought to be one of the most popular hymns with the Chartists themselves.

'Sons of poverty assemble' - another anonymous hymn but one which claims God is a Chartist: "Spread the Charter far and wide:/Truth is with us/God himself is on our side.

William Jones' 'Sons of Poverty Assemble' was usually sung to the tune of 'Calcutta', whilst Bramwich's 'Britannia's sons, though slaves ye be' was sung to the tune of 'New Crucifixion' and ends with the rousing verse:
All men are equal in His sight,
The bond, the free, the black, the white!
He made them all, - them freedom gave,
He made the man, - Man made the slave!
Other hymns protested against the exploitation of child labour:
How long shall babes of tender years
Be doomed to toil for lazy Peers -
The locusts of our land?
(Hymn 8)
While many claimed that God was a Chartist:
Crushed by oppression’s heavy load,
In slavery and want we groan,-
That such should be the will of God
We count it blasphemy to own!
[...]
God is our guide! our cause is just!
Nature’s immunities we claim;
While in the living God we trust,
We’ll spread our Charter’s glorious fame.
(Hymn 9)
And another of the hymns proclaimed: Men of wealth and men of power/ “Like locusts all thy gifts devour.