One of the University's Olympic swimming hopefuls has scooped three new gold medals to add to her growing collection. 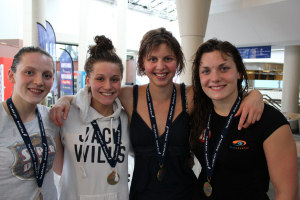 Teenage sensation Rebecca Guy (second from the right) scooped her hat trick of golds at the British Gas ASA National Youth Championships - and now has her sights firmly set on making the British team for London 2012.

Rebecca, originally from Bristol, is entering her second year at Manchester studying Philosophy and Spanish.  But her success in the pool has been hard-earned.

She said: "A typical day involves getting up at 5am, cycling to the pool, training for two-and-a-half hours and then going into University.  After a day of lectures, I normally head back to the pool from 4pm until 6.30pm, and then do about half an hour of land work every day."

But her punishing regime of training for at least five hours per day, four days per week, has been rewarded with her latest medal haul which included gold in the 50m freestyle, 4 x 100 freestyle and 4 x 100 medley with the City of Manchester Girls team.