A University of Manchester student has won the NUS Student of the Year award for her campaign to raise awareness about mental health issues. 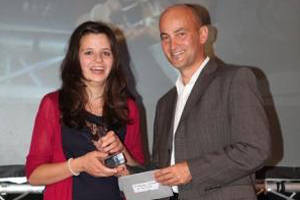 Tayaba Nicholson, a final year Nursing student specialising in mental health, received the prestigious prize at a ceremony at the University of Leeds on July 20.

Tayaba was nominated for the Endsleigh NUS Student of the Year award by the University of Manchester Students’ Union (UMSU), which has worked closely with her to set up the ‘Mental Wealth Matters’ Union society.

“It is a real honour and so exciting to have won this award,” said Tayaba, who graduated from the School of Nursing, Midwifery and Social Work earlier this month.

“Mental health – and the stigma that surrounds it – is something I feel incredibly passionate about, so this award is fantastic recognition for the Mental Wealth Matters campaign.”

Tayaba also arranged anti-stigma campaigns at UMSU’s annual Pangaea festivals and collaborated with the national suicide prevention charity, Papyrus, all while completing her final year on the Bachelor of Nursing degree, specialising in Mental Health.

She added: “Mental health can affect the student population in many ways, ranging from stress to severe and enduring mental health problems. This award is really for the one in four people who have been affected by mental health issues in some way.

“I have thoroughly enjoyed this past year and I would like to say a huge thank you to everyone who has supported and helped the Mental Wealth Matters society, in particular, Hannah, without whose support, encouragement and dedication to this campaign, none of this would have been possible.”

The NUS awards recognise excellence in the student community, highlighting the achievements of students’ unions, individual students and student media from across the country. Nominations are given in 13 categories to reward outstanding campaigns and work within local communities.

Last year, another University of Manchester student, Joseph Akinnagbe, took the NUS Student of the Year Award for his outstanding work supporting fellow students, the Students' Union and a range of community and business projects.