A University of Manchester historian is marking the little known 130-year anniversary of the launch of the Detroit Free Press’ London edition - the first American newspaper to operate abroad. 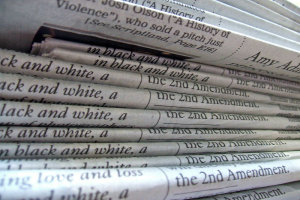 Bob Nicholson says for the best part of 20 years, the edition-launched in July 1881 was one of the bestselling papers in the UK selling more than 100,000 copies a week.

The study of the Free Press London edition  - an important milestone in American culture abroad - has been, he says, neglected by historians.

He said: “130-years ago this month, the Detroit Free Press opened an office in London – a little known but  a hugely important milestone in growing influence of American culture.

“Before long, it was flying off newsstands as Victorian readers rushed to get their hands on the latest American imports.

“Decades before the arrival of Hollywood cinema, here was a form of American popular culture taking Victorian Britain by storm.

“We tend to imagine Victorian newspapers as stuffy and old fashioned – but the Detroit Free Press was all about light entertainment and had more in common with modern magazines.

“Rather than report news, it was packed with jokes, humorous stories, serialised fiction, poetry, factoids, interesting tit-bits, slang, competitions, and other forms of 'Americana'.”

“If we want to pinpoint the moment that Britain developed a passion for American pop culture - the start of that tumultuous transatlantic love affair that would go on to define the 20th century - then July 1881 is the place to start.”

Nicholson was one of the 57 finalists shortlisted by the BBC and The Arts and Humanities Research Council during their search for 'New Generation Thinkers'.

From East Cleveland, his research is funded by the AHRC and casts new light on the Victorians’ relationship with America.

“The Victorians had an insatiable appetite for American pop culture,” he argues. “They loved playing with racy Yankee slang, laughed heartily at American jokes, and were fascinated by modern American cities like New York and Chicago.

By launching the Detroit Free Press, the Americans hoped to start making some money out of these passions.”