A Professor of Semitic Studies from The University of Manchester is one of only 38 academics to be elected a Fellow of the British Academy at its Annual General Meeting on 21 July. 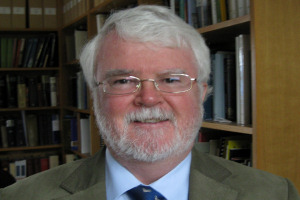 John Healey is the latest scholar to add to the University’s leading international reputation in Middle Eastern Studies going back to the 1940s.

The prestigious Academy is the UK’s national body for the promotion of the humanities and social sciences.

It is an independent, self-governing body of more than 900 Fellows, including Marina Warner, Seamus Heaney, Eric Hobsbawm and Lord Bragg.

‘I congratulate all the distinguished Fellows who have been elected to the Academy this year, on achieving this peer group recognition of the outstanding contribution they’ve made to scholarship and research in the humanities or social sciences.  Election is not only an honour, but also a beginning. I look forward to their active participation in the life and work of the Academy.’

Professor Healey said: “As the most senior member of the Department of Middle Eastern Studies, I thank the Academy for its recognition of my work in the context of a Manchester institutional commitment to the better understanding of the Middle East and Islam.

He added: “My own particular area of research, the ancient and Roman Near East, remains important for the present day, because the peoples of the modern Middle East are rightly proud of their cultural heritage.

“In Syria, Iraq, Jordan, the Arabian peninsula and Turkey, ordinary people want the West to appreciate this cultural heritage to counterbalance prejudices about Muslims and Arabs. I see it as my task to contribute, with my western and Arab colleagues, to this corrective rebalancing.”

John Healey came to the Manchester Department of Middle Eastern Studies from Durham University in 1989.

He is a graduate of University College Dublin and obtained his PhD in 1977 at the School of Oriental and African Studies, University of London, for work on the Ugaritic literature — Ugarit was a Late Bronze Age city on the Syrian coast, destroyed c. 1200 BCE, but leaving behind a substantial poetic literature.

Since the mid-1980s Professor Healey has concentrated on Aramaic inscriptions, especially in the Greek and Roman periods. He is currently working on a grammar of Nabataean Aramaic.

Apart from being one of the editors of the University of Manchester’s prestigious Journal of Semitic Studies (Oxford University Press), he is on the editorial boards of Levant (London), Aram (Oxford) and Aramaic Studies (Leiden) and of journals published in Kuwait and Saudi Arabia.