The southbound service from Piccadilly will be affected from 18 July for about 10 days. 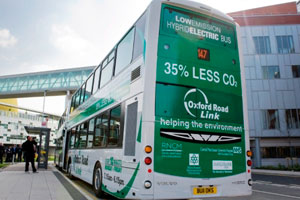 Due to Sackville Street being made one-way, the southbound service, from Piccadilly, will be diverted from 18 July for about 10 days. This means the service will not go down Sackville Street and pick up from under the arches on North Campus or pick up from the stop opposite the Charles St car park.

Instead, there will be a temporary stop on Whitworth Street, outside the Sackville Street Building. The buses will then turn left into Princess Street, right into Charles Street and continue along the usual route.

Signage has been place at the arches and on the buses. The northbound service, toward Piccadilly, is unaffected.

Apologies for the late notice and the inconvenience caused but TfGM gave incorrect information initially.

For further information on the 147 service, visit: