Political films made in Hollywood are almost always reluctant to criticise the establishment, whereas the opposite is usually true of their British counterparts, according to a new book. 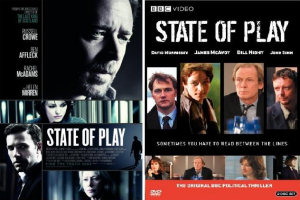 Dr Ian Scott from The University of Manchester says political and commercial pressures ensure Hollywood films are at heart patriotic and reinforce establishment principles and values.

But because the budgets for British films are dwarfed by their Hollywood counterparts, they are rarely subject to the same commercial pressures, resulting in a gritty realism likely to question the role of authority.

Successful British dramas such as State of Play and Edge of Darkness lost some of their edge when transferred to the big screen courtesy of Hollywood, he said.

Ken Loach and Mike Leigh on the other hand, British filmmakers long used to taking on social and political topics, are prime examples of directors who feel it is their duty almost to challenge the system. Hollywood directors can't and often don't have the same freedom, suggests Scott.

Both Edge of Darkness, starring Mel Gibson brought out in 2010 and State of Play, starring Russell Crowe in 2009, were honest enough interpretations of the BBC originals, but more hopeful and optimistic than those historic series, he argues.

American Politics in Hollywood Film, is published by Edinburgh University Press this month.

Dr Scott said: “Political movies are extremely influential in culture, generally tackling controversial subjects like the Kennedy shooting in JFK or the Munich Olympics disaster in Spielberg’s Munich, or the aftermath of 9/11 in Moore's Fahrenheit 9/11.

“But not in the way you might think: rather than being an expose of a corrupt system, they actually almost always underscore that system.

“You don’t have to be a conspiracy theorist to realise that the Hollywood film companies are multinationals who depend on the good will of powerful people across the world.”

He added: “You can’t lump all political movies together either as they obviously consist of different sub-genres whether that’s political thrillers, Presidential elections, or political biographies, doing different things.

“But though achieved by alternate methods, the net result is usually the same: an endorsement of the values, beliefs and identity that has been so important to the United States throughout its history.

“That message can and often does succeed with audiences because cinema-goers regard political movies as serious, well made films that are capable of articulating ideas. Audiences have far more will and belief in these types of pictures than they are often given credit for.

“Indeed the makers of films like The Manchurian Candidate, All the Presidents Men and Fahrenheit 9/11 will wear establishment criticism as a badge of honour even when in reality, these remarkable and hard-hitting pictures actually reinforce the establishment.”