Chips hold the key to understanding the human brain

University of Manchester scientists have taken a key step towards producing a high-performance computer which aims to create working models of human brain functions. 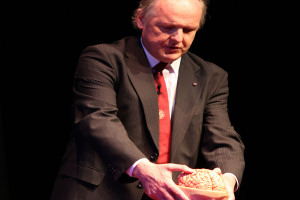 Chips based on ARM processor technology will be linked together to simulate the highly-complex workings of the brain, whose functionality derives from networks of billions of interacting, highly-connected neurons.

The chips upon which this work critically depends were delivered last month, and have passed their functionality tests with flying colours.

They will form the system architecture for a massive computer, called SpiNNaker (Spiking Neural Network architecture), which aims to map out the brain’s individual functions.

SpiNNaker could be a vital tool for neuroscientists, psychologists and doctors to help them understand complex brain injuries, diseases and conditions, and identify the most effective therapies.

The University of Manchester was selected to design the system architecture for the project, and received half of the £5m EPSRC grant which supported the work, while the universities of Southampton, Cambridge and Sheffield share the rest to work on other parts of the project.

Even though there will be up to one million ARM processors, – technology used in most of the world’s mobile phones– in the final SpiNNaker machine, computer scientists point out that this will enable  them to recreate models of only up to 1% of the human brain.

The researchers, lead by Professor Steve Furber, believe the machine will be a vital tool for neuroscientists and psychologists to test hypotheses on individual brain characteristics.

The key challenge is developing and understanding the information processing of the brain and the extremely high connectivity of the brain cells. There are 100 billion neurons with 1,000 trillion connections in the human brain. In this system, the neurons emit spikes which are relayed as tiny electrical signals. Each impulse is modelled in SpiNNaker as a ‘packet’ of data, a very-much scaled down version of the way the internet carries information.

This packet is then sent to all connected neurons. Neurons are represented by small simple equations which are solved in real-time by software running on the ARM processors.

Test chips were brought out in 2009, but now the full chips, designed in Manchester and manufactured in Taiwan, have been delivered and will allow the scientists to develop much larger systems which can model the brain. Each chip contains 18 ARM processors.

The bespoke microchips are integrated in a single 19mm square package with a second microchip that provides substantial memory using 3D System-in-Package technology from Unisem Europe Ltd, who have packaging facilities in south Wales. This package delivers the computing power of a PC in a tiny space and for around one watt of electrical power.

Professor Furber, from the School of Computer Science, said: “We hope the machine will be able to model important functions of the human brain and help us gain key insights into their principles of operation.

“Developing and understanding the information processing in the brain is the key. We are actively engaging with neuroscientists and psychologists, both here at the University and elsewhere.

“This could ultimately be of great help for patients, for example, who have presented with reading problems caused by strokes or similar brain injuries. Psychologists have already developed neural networks on which they can reproduce the clinical pathologies.

“They then use these networks to test alternative therapies, to identify which is most effective in treating the patient’s symptoms. At present they are limited in the fidelity they can achieve with these networks by the available computer power, but we hope that SpiNNaker will raise that bar a lot higher.

“We don’t know how the brain works as an information-processing system, and we do need to find out. We hope that our machine will enable significant progress towards achieving this understanding.”

ARM was approached in May 2005 to participate in the SpiNNaker project. A subsequent agreement paved the way to make ARM processor Intellectual Property (IP) available to the project, along with ARM cell library IP to aid design and manufacturing. The agreement allowed University of Manchester to manufacture chips for a system with 1 million ARM-based processors, as well as some smaller test systems.

“The ARM architecture is all about enabling the ARM partner ecosystem to produce smarter systems that are optimized for performance and power consumption,” commented Mike Muller, Chief Technical Officer, ARM.”SpiNNaker seeks to create a working model of the ultimate smart system, the human brain. Steve is part of the ARM family, so this project was a perfect way to partner with him and Manchester University, and for ARM to encourage leading research in the UK.”