For every night of the Festival (30 June-17 July), at the Whitworth Art Gallery, Whitworth Park will come to life for Tony Oursler’s The Influence Machine, a spectral son-et-lumiere with videos projected onto trees and smoke. 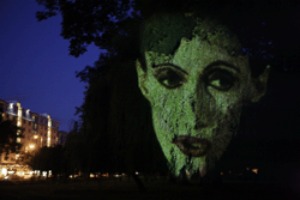 The gallery is also open every night until 11pm for the world premiere of 1395 Days without Red, a haunting new film set in Sarajevo during the three and a half year siege and Projections: Works from the Artangel Collection including films of a fox lost in the National Portrait Gallery and a tightrope walk between two Glasgow tower blocks.

The Influence Machine is on from 10.30-11.30pm and you can pop in for 15 minutes or stay for an hour. It’s on every night Monday to Saturday.

The gallery is open until 11pm every night except Sundays.