The wonders of graphene on display 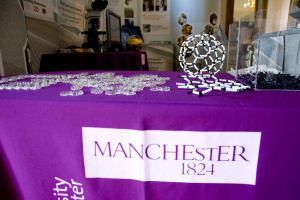 Graphene, discovered in 2004 at The University of Manchester by Professor Andre Geim and Professor Kostya Novoselov, is one of the world’s most versatile materials, and is already being used in such varied applications as touch screens, transistors and aircraft wings.

Researchers from the University are presenting the vast potential of the wonder material at the Royal Society’s annual Summer Science Exhibition which opens today.

The display aims to tell the remarkable story of the discovery of graphene, and how Professors Geim and Novoselov realised the full significance of their work – culminating in the award of the 2010 Nobel Prize for Physics.

The pair, who have worked together for more than a decade since Professor Novoselov was Professor Geim’s PHD student, used to devote every Friday evening to ‘out of the box’  experiments not directly linked to their main research topics.

One Friday, they used Scotch tape to peel away layers of carbon from a piece of graphite, and were left with a single atom thick, two dimensional film of carbon – graphene.

Visitors will be given the chance to learn what a two dimensional material looks like using simple models, and to make graphene themselves.

In an interactive display called the Virtual Microscope visitors will be able to see real images of graphene, originally obtained in one of the world’s most advanced Transmission Electron Microscopes (TEM), the Daresbury SuperSTEM.

The high magnifications that can be achieved in this instrument allow direct observation of the atomic lattice of graphene, in its perfect state, but also with defects and foreign atoms, unintentionally or deliberately introduced. The SuperSTEM images have been implemented in the Virtual Microscope in a way that allows zooming into areas of interest like in the real instrument.

The material, which resembles a “chicken wire” like structure and was previously thought to be unstable in its free form, is very strong, transparent and highly conductive.

Many of its properties are unique or far superior to those in other materials, which make it such an exciting new material to study.

Charge carriers in graphene appear to have no mass and can travel very large distances without being scattered. This makes it a good testing ground for interesting quantum effects and gives it many applications for fast electronics. It is extremely transparent and being such a good electrical conductor makes it an ideal transparent electrode in LCD displays and solar cells.

The researchers have also made gas sensors from graphene several times smaller than a hair’s width and so sensitive they can detect when a single gas molecule is present on them.

It makes an extremely strong support membrane for observing biological molecules in a Transmission Electron Microscope and is so electron transparent even individual metal atoms can be seen on its surface, which visitors can experience for themselves in the virtual TEM. It is the strongest material found so far, which can be used to make ultra-strong, conductive composite materials.

The exhibit will also feature entertaining and educational iPad games, which can also be downloaded for iOS and Android devices from their respective app stores.

One of the exhibitors, Dr Ernie Hill, said: “This is a great opportunity for us to present some of our groundbreaking work to the general public in what we hope is an interesting and entertaining way.

“The story of how Andre and Kostya produced this remarkable material is inspirational for any youngster wishing to enter research as a career and indeed to anyone with an interest in scientific discovery.”

The scientists will be on hand at the exhibition which runs from 5 July to 10 July, to talk visitors through the research.