Pigment patterns from the prehistoric past

An international collaboration led by researchers at The University of Manchester has for the first time revealed chemical traces of pigments in bird, fish and squid fossils, some over 100 million years old. 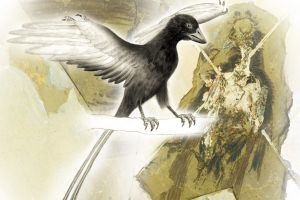 Publishing their findings in Science, the researchers have been able to show a remarkable relationship between copper and pigment within exceptionally preserved feathers and other soft tissues.

Pigment is a critical component of colour. The team can map the presence of pigments over whole fossils, revealing original patterns. The team’s findings indicate that pigment chemistry holds the future key to the ultimate goal of discovering the colour palette of past life, from dodos to dinosaurs and beyond.

Colour has played a key role in the processes of evolution by natural selection that have steered all life on Earth for hundreds of millions of years.

This unique scientific breakthrough can allow paleontologists to reconstruct colour patterns in extinct animals, as well as provide an understanding of the way in which biological compounds are preserved in specific environments over deep time.

This could give them a far greater understanding of the feeding habits and environments occupied by extinct creatures, as well as shedding light on the evolution of colour pigments in modern species.

The application of X-ray physics to palaeontology has shed new light on the tangled tale of prehistoric pigments in deep time and how to recognise its chemistry in fossils that are hundreds of millions years old.

Dr Wogelius, lead author on the paper and University of Manchester geochemist, said: “Every once in a while we are lucky enough to discover something new, something that nobody has ever seen before.

“For me, learning that copper can be mapped to reveal astonishing details about colour in animals that are over 100 million years old is simply amazing. But even more amazing is to realize that such biological pigments, which we still manufacture within our own bodies, can now be studied throughout the fossil record, probably back much further than the 120 million years we show in this publication.”

To unlock the stunning colour patterns, the Manchester researchers teamed up with scientists at SLAC National Accelerator Laboratory (USA) and used the Stanford Synchrotron Radiation Lightsource to bathe fossils in intense synchrotron X-rays.

The interaction of these X-rays with the chemistry of each fossil allowed the team to recognise the chemistry of eumelanin, the molecule that provides the dark coloured pigmentation, in feathers from some of the most pivotal species of dino-birds and even pigment from within the eye of a 50 million year old fish.

The key to their work was identifying and imaging trace metals incorporated by ancient and living organisms into their soft tissues, in the same way that all living species do today, including humans.

Dr Phil Manning, a senior author on the paper and University of Manchester palaeontologist, added:”The fossils we excavate have vast potential to unlock many secrets on the original organism’s life, death and subsequent events impacting its preservation before and after burial.

“To unpick the complicated chemical archive that fossils represent requires a multidisciplinary team that can bring in to focus many areas of science.

“In doing this, we unlock much more than just palaeontological information, we now have a chemical roadmap to track similar pigments in all life.”

Results show that chemical remnants of pigments may survive even after the melanosome (biological paint pots) containing pigment has been destroyed. Some of the samples they publish clearly preserve a chemical fossil, where almost all structure has been lost in the sands of time. The chemical residue can be mapped to reveal details of the distribution of dark pigment (eumelanin), probably the most important pigment in the animal kingdom.

This pigment gives dark shading to human hair, reptile skin, and bird feathers. Using rapid scan X-ray fluorescence imaging, a technique recently developed at SLAC, the team was able to map the residue of dark pigment over the entire surface of a large fossil, for the first time giving clear information about fundamental colour patterning in extinct animals. It turns out that the presence of copper and other metals derived from the original pigment gives a non-biodegradeable record of colour that can last over deep geological time.

Dr Uwe Bergmann, SLAC physicist and co-author on the paper said: “Synchrotron radiation has been successfully applied for many years to many problems.

“It is very exciting to see that it is now starting to have an impact in palaeontology, in a way that may have important implications in many other disciplines. To work in a team of such diverse experts is a privilege and incredibly stimulating. This is what science is all about.”

Using this novel method to accurately and non-destructively measure the accumulation of trace metals in soft tissues and bone, the team also studied the chemistry of living species, including birds.

Dr Wogelius added: “This advance in chemical mapping will help us to understand modern animals as well as fossils. We may also be able to use this research to improve our ability to sequester toxic materials such as radioactive waste and to devise new strategies for stabilizing man-made organic compounds”.

Some of the results are also presented in an upcoming National Geographic special, for more details see http://channel.nationalgeographic.com/episode/in-living-color-4493/Overview