The University of Manchester snooker team has been crowned champions of the Manchester & District Snooker League 2010-2011. 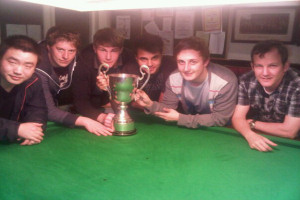 The team, which is part of the Cue Sports club, run by a group of Manchester students, clinched the title after beating a dozen other teams over the course of the year.

Many of the squad attended an awards and presentation night held at Levenshulme Bowling Club to pick up their trophy.