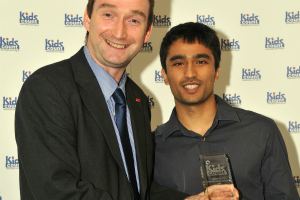 Yusuf, 22 and in his final year of a four-year course, was given the award for being an inspiring young mentor. He has spent the last three years making a difference to over 50 young people in Manchester whilst also completing a Civil Engineering degree at The University of Manchester.

He initially mentored at ReachOut!’s Saturday Soccer School and has since progressed to become a Project Manager. Now, he volunteers leading the ReachOut! Homework Club project in Moss Side’s Chrysalis Centre.

Due to funding constraints, the Club would not have gone ahead this year without him and his fellow Project Manager Laura Hillier.

ReachOut! is a mentoring charity which aims to raise the aspirations of children in disadvantaged communities and help them grow in character and competence. It works with children and young people aged 8-18 to improve self-confidence and develop numeracy, literacy, communication and memory skills. Over 98% of their 200 volunteers are students at The University of Manchester.

The Award was presented during a ceremony at the House of Commons by local MP John Leech.

Yusuf said, “Volunteering with ReachOut! over the past three years has been an amazing experience from which I have gained so much. The staff and children have been incredible and I’m glad to have spent time outside of University to get involved with ReachOut!. The Kids Count Best Mentor 2011 award has been extra special for me.”

Read more about ReachOut! online at: