The captain of the University football team, Matt Smith, has signed professional terms with Oldham Athletic. 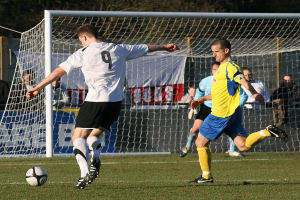 The six-foot-six centre forward has signed a two-year deal at Boundary Park.  He is currently completing the final year of his degree in International Management with American Business Studies at Manchester Business School.

The 21-year-old striker has had a remarkable season, scoring 23 goals in the Conference North, but this is his first shot at full-time football.

Matt said: "I heard there was interest from a number of clubs, but the most came from Oldham.  After speaking to (manager) Paul Dickov, I was convinced Oldham Athletic was the club for me. It is up to me to work hard, and if I do, I am confident I can make the step-up."

Matt signed for non-league Solihull Moors in February and scored 12 goals in just 14 games, as the team finished just outside the Play Off places, catching the attention of several Football League sides.

Matt added: "I want to make that step up and I feel that I need to play in a full-time professional environment at the end of my degree in order to see improvements in my game.  I am 21 now, going on 22, so it really is the right time to do this and I am relishing the opportunity to turn professional."

Oldham boss Paul Dickov said: "Every time myself or my staff has seen Matt play he has had that knack of scoring.  Matt is young and hungry and I am hopeful that with time he will make the step up.

"He has never had full-time training so I am sure he will benefit from that.  Matt has a fantastic attitude as you can see from the discipline required to study for a degree."

Matt spent his teenage years in Cheltenham Town’s Academy before coming to Manchester and signing for New Mills. He spent last year playing in the United States during a year at Arizona State University as part of his degree.