Protection against one of Africa’s oldest animal plagues

An international research team, including University of Manchester scientists, using a new combination of approaches has found two genes that may prove of vital importance to the lives and livelihoods of millions of farmers in a tsetse fly-plagued swathe of Africa. 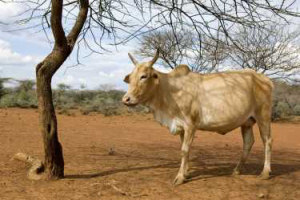 The team’s results, published in the Proceedings of the National Academy of Sciences (PNAS), is aimed at finding the biological keys to protection from a single-celled trypanosome parasite that causes both African sleeping sickness in people and a wasting disease in cattle.

The disease, which affects people and animals in a vast swathe of Africa the size of the USA, brought together a range of high-tech tools and field observations to address a critical affliction of some of the world’s poorest people.

Sleeping sickness affects an estimated 300,000 Africans each year, eventually killing more than half of them.

The annual economic impact of ‘Nagana’, a common name in Africa for the form of the disease that affects cattle (officially known as African animal trypanosomiasis), has been estimated at US$4–5 billion.

In a vast tsetse belt across Africa, stretching from Senegal on the west coast to Tanzania on the east coast, and from Chad in the north to Zimbabwe in the south, the disease each year renders millions of cattle too weak to plow land or to haul loads, and too sickly to give milk or to breed, before finally killing off most of those infected.

This means that in much of Africa, where tractors and commercial fertilizers are scarce and prohibitively expensive, cattle are largely unavailable for tilling and fertilizing croplands or for producing milk and meat for families.

The tsetse fly and the disease it transmits are thus responsible for millions of farmers having to till their croplands by hand rather than by animal-drawn plow.

This genetics of disease resistance research was led by scientists from the International Livestock Research Institute in Nairobi, Kenya, and from the UK Universities of Liverpool, Manchester and Edinburgh, and involved researchers from other institutions in Britain, Ireland and South Korea.

The researchers drew on the fact that while the humped cattle breeds characteristic of much of Africa are susceptible to disease-causing trypanosome parasites, a humpless West African breed, called the N’Dama, is not seriously affected by the disease.

Having been domesticated in Africa some 8,000 or more years ago, this most ancient of African breeds has had time to evolve resistance to the parasites. This makes the N’Dama a valued animal in Africa’s endemic regions.

Finding these genes has been the “Holy Grail” of a group of international livestock geneticists for more than two decades, but the genetic and other biological pathways that control bovine disease resistance are complex and have proven difficult to determine.

The PNAS paper is thus a landmark piece of research in this field. The international and inter-institutional team that made this breakthrough did so by combining a range of genetic approaches, which until now have largely been used separately.

They used these genetic approaches to distinguish differences between the ”trypano-tolerant” (humpless) N’Dama, which come from West Africa, and “trypano-susceptible” (humped) Boran cattle, which come from Kenya, in East Africa.

The scientists first identified the broad regions of their genomes controlling their different responses to infection with trypanosome parasites, but this was insufficient to identify the specific genes controlling resistance to the disease.

So the scientists began adding layers of information obtained from other approaches. They sequenced genes from these regions to look for differences in those sequences between the two breeds.

The team at Edinburgh conducted gene expression analyses to investigate any differences in genetic activity in the tissues of the two cattle breeds after sets of animals of both breeds were experimentally infected with the parasites.

Then, the ILRI group tested selected genes in the lab. Finally, they looked at the genetics of cattle populations from all over Africa.

Professor Andy Brass and his team in the School of Computer Science at The University of Manchester managed to capture, integrate and analyse the highly complex set of biological data by using workflow software called “Taverna” which was developed as part of a UK e-Science initiative by  Manchester computer scientist Professor Carole Goble and her “myGrid” team.

Professor Brass said: "The Taverna workflows we developed are capable of analysing huge amounts of biological data quickly and accurately.

“Taverna’s infrastructure enabled us to develop the systematic analysis pipelines we required and to rapidly evolve the analysis as new data came into the project. We’re sharing these workflows so they can be re-used by other researchers looking at different disease models

"This breakthrough demonstrates the real-life benefits of computer science and how a problem costing many lives can be tackled using pioneering e-Science systems.”

With this new knowledge of the genes controlling resistance to trypanosomiasis in the N’Dama, breeders could screen African cattle to identify animals with relatively high levels of disease resistance and furthermore incorporate the genetic markers for disease resistance with markers for other important traits, such as high productivity and drought tolerance, for improved breeding programs generally.

If further research confirms the significance of these genes in disease resistance, a conventional breeding program could develop a small breeding herd of disease-resistant cattle in 10–15 years, which could then be used over the next several decades to populate Africa’s different regions with animals most suited to those regions.

Using genetic engineering techniques to achieve the same disease-resistant breeding herd, an approach still in its early days, could perhaps be done in four or five years,