The Captain of The University of Manchester Football Club has been called up to play for England. 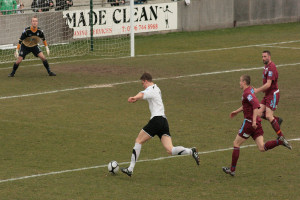 21-year-old Matt Smith has been named in the England C squad for the final of the International Challenge Trophy against Portugal.

Matt, from Fallowfield, is the only student to be included in the 40-man provisional squad, made up of the top non-league players in the country.

The giant striker said: “The England call-up is fantastic, and it certainly won’t do any harm on my CV! I am hoping to become a full-time professional next season so this comes at the perfect time.”

The six-foot-six centre forward has had a remarkable season, scoring 23 goals in the Blue Square North for Droylsden, Redditch United and, most recently, Solihull Moors.

And despite his non-league commitments, Matt has continued to captain the University first team, whilst juggling the demands of the final year of his course at Manchester Business School, International Management with American Business Studies.

Matt said: “Juggling everything this year has been particularly difficult, just ask my house mates who rarely see me! I’ve had to sacrifice my social life, but football is something that I want to pursue, so in my eyes it’s all worth it. Playing every Wednesday for the university and then Saturdays and mid-week in the Conference North has been hard work, and then to add on all my University work – I don’t really know how I’ve done it.”

Matt signed for Solihull in February and has scored 12 goals in just 14 games, as the team finished just outside the Play Off places. His goal scoring exploits have caught the eye of the England camp, but also several clubs at a higher level.

“I am now waiting to hear what offers come in over the summer; there has already been interest from a number of Football League and Conference Premier clubs. I have an agent to represent me, which has helped me massively in remaining focused on my studies. We are just considering and weighing up the options now.

“I want to make that step up and I feel that I need to play in a full-time professional environment at the end of my degree in order to see improvements in my game. I am 21 now, going on 22, so it really is the right time to do this and I am relishing the opportunity to turn professional. It would be a dream come true.”

The England C team will face Portugal’s Under-23 side at Rushden & Diamonds on May 19 - the Portuguese will include ex-Bolton striker Ricardo Vaz Te and Benfica’s Fabio Contrao, who played in the 2010 World Cup.

Matt spent his teenage years in Cheltenham Town’s Academy before coming to Manchester and signing for New Mills. He spent last year playing in the United States during a year at Arizona State University as part of his degree.

To cap an incredible twelve months, Matt has also been called up to the squad for the World University Games in China this summer and is nominated for the University’s Sportsman of the Year Award.

Director of Sport at the University, Alison Odell said: “In all my 30 years (and more) at the University, it is very rare - probably unique - for one of our footballers to achieve a potential double honour in terms of call-ups both for England and for the GB squad for the World University Games.  In SPORT we are delighted that one of our traditional sports is now featured through Matt’s achievements, and wish him every success on both counts.”

Matt appears destined to become a top flight footballer, because it runs in the family. His dad Ian, now a doctor, was a striker at Birmingham City during the Trevor Francis era in the mid-70s whilst his grandfather James was also a striker at St Mirren and later became a GP. His half-brother Jean-François is a top flight professional basketball player in France, and is even taller than Matt at 6’8.

Matt said: “Since I was a kid growing up in Evesham, my dad has been coaching me and he comes to watch every game I play, so I have had fantastic support from my family.”

Matt has been bowled over by the support he has enjoyed here in Manchester and would be keen to sign for a club in the North West next season.

He said: “Coming to Manchester has been a great decision, some of my friends applied here and I knew that I wanted to follow a degree course that included a year in the States, so International Management with American Business Studies at MBS was perfect for me.

“Also Manchester is an ideal location for football, as there are so many clubs around the area and the interest is phenomenal.”

Solihull Moors manager Micky Moore was delighted to hear about Matt’s England call-up, saying: “It is a fantastic honour for Matt and it’s great for the club. It’s a dream for any footballer to play for their country, at whatever level.”