Graphene, the world’s thinnest and most versatile material discovered by University of Manchester professors Andre Geim and Kostya Novoselov, has been selected as one of six possible projects for a 10-year, one billion Euro research initiative. 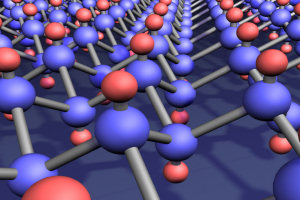 Funded by the European Commission, the collaborative flagship Future Emerging Technology (FET) scheme is aimed at a breakthrough for technological innovation and economic exploitation based on graphene and related two-dimensional materials.

Graphene, a single layer of carbon atoms, may be the most amazing and versatile substance available to mankind.

Stronger than diamond, yet lightweight and flexible, graphene enables electrons to flow much faster than silicon.
It is also a transparent conductor, combining electrical and optical functionalities in an exceptional way.

Graphene can trigger a smart and sustainable carbon revolution, with profound impact in information and communication technology and everyday life.

The groundbreaking experiments on graphene in 2004 at The University of Manchester by Professors Geim and Novoselov were awarded the 2010 Nobel Prize in Physics.

Their work has sparkled a scientific explosion, best illustrated by the exponential growth of publications and patent applications related to graphene.

Huge amounts of human resources and capital are invested into graphene research and applications in the US, Japan, Korea, Singapore and elsewhere. The first products are expected to enter the market by 2014, according to estimates by Samsung.

The research efforts of individual European research groups pioneered graphene science and technology, but a coordinated European level approach is needed to secure a major role for the EU in this ongoing technological revolution.

The graphene flagship aims to bring together a large, focused, interdisciplinary European research community, acting as a sustainable incubator of new branches of ICT applications, ensuring that European industries will have a major role in this radical technology shift over the next 10 years.

An effective transfer of knowledge and technology to industries will enable product development and production.

The pilot phase coordination action started on May 1. Its task is to pave the way for the full, ten year, one billion Euro flagship both in terms of the organisational framework and a scientific and technological roadmap for research and innovation.

The action plan for the FET flagship will be submitted in 2012 to the European Commission, aiming for graphene to be one of the two flagships launched in 2013.

Professor Jari Kinaret, from the Chalmers University of Technology, the project leader of GRAPHENE-CA, said: “We are convinced that exploiting the full potential of graphene will have huge impacts on society at large, and thrilled that the EU Commission shares our view and believes in our focused and open approach to moving forward.”