A University of Manchester geologist has been given a prestigious award for outstanding achievement in the field of Earth Sciences. 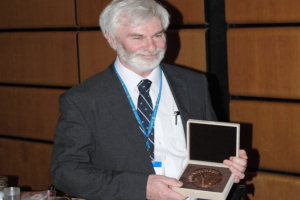 Professor Ernie Rutter was awarded the Louis Néel Medal from the European Geophysical Union for his pioneering work in natural rock deformation.

The award, which has been running since 1993, rewards the scientists who achieve outstanding results in ‘the fertilization of the earth sciences by the transfer and application of fundamental theory and/or experimental techniques of solid state physics.’

Professor Rutter, from the University’s School of Earth. Atmospheric and Environmental Sciences, was given the award at the European Geosciences Union General Assembly in Vienna last week.

The citation for his award runs: "The Louis Néel Medal is presented to Ernest Henry Rutter for his major experimental and field contributions to our fundamental understanding of the deformation behaviour of the Earth’s lithosphere.

"In particular, his systematic laboratory studies have led to a greatly improved understanding of natural rock deformation.”

“He richly deserves this recognition from the EGU. {His} studies have provided important insights into the mechanical complexity of fault zones and the control of weak phases, such as clay and mica, on their strength.

“His early papers on pressure solution and the chemical influence of water on time-dependent deformation are seminal and highly-cited studies.

“All of [his] studies have been greatly strengthened by Ernie's work on the connection between microstructures produced in the laboratory and those observed in naturally deformed rocks.

This combination of rigour in integrating field observations with laboratory experiments is crucially important in Earth Sciences, but also very rare. It represents an outstanding achievement. Ernie Rutter therefore richly deserves the Neel Medal and the high honour that it represents.”

The medal was set up in honour of the scientific achievements of Louis Eugène Felix Néel, who shared the 1970 Nobel Prize of Physics for his fundamental research and discoveries concerning antiferromagnetism.

Professor Rutter works in the University’s Rock Deformation Laboratory, and is an expert on earthquakes, landslides and natural rock deformation. He made frequent media appearances during the recent Japanese earthquake and tsunami to explain the tragic events.

He has made major contributions to the field of structural geology and the physics of natural rock deformation over four decades.

He said: “This is an international honour of which I feel very proud, but it is equally a recognition of the contributions made by the Manchester Rock Deformation Laboratory and in particular my research collaborators and research students over many years.”