LOFAR takes the pulse of the radio sky

A powerful new telescope is allowing an international team led by University of Manchester scientists to have their “best-ever look” at pulsars – rapidly rotating neutron stars created when massive stars die. 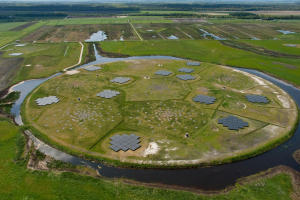 In the first scientific results from the new European telescope LOFAR (Low Frequency Array) to appear in a journal – Astronomy & Astrophysics – the scientists present the most sensitive, low-frequency observations of pulsars ever made.

The International LOFAR Telescope is the first in a new generation of massive radio telescopes, designed to study the sky at the lowest radio frequencies accessible from the surface of the Earth with unprecedented resolution. Deep observations of pulsars is one of its key science goals.

Dr Benjamin Stappers, from the School of Physics and Astronomy who co-leads one of the LOFAR projects and is the lead author on the paper, said: "We are returning to the frequencies where pulsars were first discovered, but now with a telescope of a sophistication that could not have been imagined back in the 1960s.”

The chance detection of the first pulsar in 1967 is considered one of the great discoveries in astronomy.

Astronomers got their first glimpse of pulsars by using a radio telescope sensitive to frequencies of 81MHz (roughly the same frequency as a commercial FM radio station).

With LOFAR, astronomers have gone back to some of the same techniques used in the first pulsar observations, but have used modern computing and optical fibre connections to increase many times over the power of their telescope.

This will allow LOFAR to analyse regular pulses of radio emission and probe such things as the physics of gravity and the properties of the material that pervades our Galaxy.

Dr Stappers said: “Even though these are just the first test results they are already showing spectacular promise.”

LOFAR works by connecting thousands of small antennas spread right across Europe using high speed internet and a massive supercomputer near its central core at The Netherlands Institute for Radio Astronomy (ASTRON).

The LOFAR telescope has no moving parts, instead relying on adding digital time delays to ‘point’ the telescope in a particular direction.  This approach offers a much-greater level of flexibility in the way astronomers can analyse the data.

For instance, unlike a conventional radio telescope, it is possible to point in multiple directions simultaneously simply by having the computer crunch more data.

For astronomers who want to search for new pulsars, this means they can scan the sky much more quickly.

Dr Jason Hessels, from ASTRON, said: “A traditional radio telescope is limited to viewing a very small fraction of the sky at any one time.  LOFAR casts a much broader net, which is going to help us discover new pulsars and detect explosions that were too rare to catch with past telescopes."

Dr Aris Karastergiou of the University of Oxford says: "Pulsars are brightest at wavelengths observed by LOFAR and show a variety of puzzling emission features. We are very excited about using the centre of LOFAR in the Netherlands, and the international stations such as Chilbolton in the UK in a new approach to understanding these exotic objects.”

The team's next step is to harness LOFAR's capabilities to address some of the long-standing mysteries about how pulsars shine and also to discover nearby pulsars that were missed by past telescopes.

"LOFAR has the potential to find all the undiscovered pulsars in the neighbourhood of the Sun and to reveal rare explosions in our Galaxy and beyond.  We're very excited to see what's out there." says Tom Hassall, a Manchester University PhD student working on the project.

LOFAR is capable of detecting radio waves over a very large range of frequencies, all the way from 10MHz to 240MHz. As well as searching for pulsars, LOFAR will be used for making deep images, cosmology, to monitor the Sun’s activity and study planets.

LOFAR will also contribute to UK and European preparations for the planned global next generation radio telescope, the Square Kilometre Array (SKA) – the headquarters of which will based at The University of Manchester’s Jodrell Bank Observatory.