World-renowned author Colm Toibin has been appointed as Professor of Creative Writing at The University of Manchester. 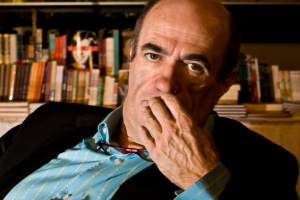 The Toibin appointment coincides with the news that Martin Amis is to finish his tenure at the University in July after four years, also as Professor of Creative Writing.

After extending his time at the University by a year, Amis and his family are moving to New York, the home city of his wife.

Since his arrival, there has been a 100 per cent increase in students applying for Centre for New Writing Courses where he is based.

His sell out public events were hugely popular – attracting luminaries such as Howard Jacobson, John Banville, and Melvyn Bragg.

Professor Toibin will continue where Amis left off, teaching postgraduate students for two days a week at the University for one semester a year and taking part in four public events.

He will hold a fiction workshop for Master students and a new course called Arts for Writers-  where he will bring composers, artists and other arts practitioners into the seminar room to explore how music art and theatre influences writing.

Colm Toibin, teaches at Princeton University in America until he starts at Manchester in September, and has just published a new book of stories called the Empty Family.

He is a multi-award-winning Irish novelist, short story writer and critic.

He said: “'I'm looking forward to starting at Manchester in September.

“I visited the Centre for a reading two years ago and I saw and liked how the students combined writing new work with  reading and talking about literature, in seminars and workshops and in the public events which bring the work out of the university and into contact with the wider world.”

Martin Amis' penultimate event at the University will be a conversation with Ian McEwan on Monday 7 February.

He said: “'Teaching creative writing at Manchester has been a joy. I've become very fond of my colleagues, especially John McAuliffe and Ian McGuire.

“I was impressed by the four instalments of 'youth' I encountered - they seemed to me impressively independent-minded and non-ideological.

“I loved doing all the reading and the talking; and I very much took to the Mancunians.

“They are a witty and tolerant contingent.

“We are moving to NY purely for family reasons. I will never quite leave London, and I hope to revisit Manchester regularly.”

“His presence drew high calibre students to the Centre.

“His readings of classic fiction for seminars and his hugely popular public events act as a model of engagement with literature and its 21st century contexts for writers now and in future.

"Colm Toibin, a great writer and a public intellectual, will be a similarly iconic appointment, inspiring students as well as contributing to cultural debates inside and outside the university.”