A new TV series featuring dinosaur detectives from The University of Manchester looking at how dinosaurs once lived, looked and functioned begins in the UK this week. 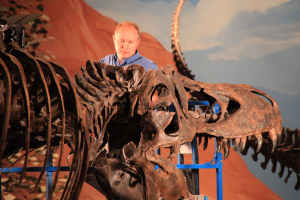 Presented by University of Manchester palaeontologist Dr Phil Manning, the series will be aired on the National Geographic Channel, starting in the UK on Thursday February 3rd, before being transmitted to many countries around the world.

It is the first ever series on dinosaurs commissioned by National Geographic, as previously documentaries have only aired as one or two-hour specials.

Jurassic CSI will for the first time provide a detailed forensic look at dinosaurs that goes way beyond skin deep.

A series of six, one-hour episodes, the programmes follow the innovative research program the Manchester team has been undertaking, helping to unpick the lives of dinosaurs.

From the cranial capacity of a ferocious predator to the delicate traces of colour preserved in the feathers of ancient predators, the series takes viewers on a journey of discovery.

The team of scientists take a close look at the slings and arrows of misfortune that impacted on the rough and tough lives of predators and their prey in the age of the dinosaurs.

Then the series moves on to the problems associated with just being vast, as size really does matter when you're a dinosaur.

Even the subtle issue of what dinosaurs look like, from texture and colour of skin is critically reviewed and researched with some surprising conclusions.

The series features many University of Manchester academics, from the Schools of Materials, the School of Earth, Atmospheric and Environmental Sciences, Research Computing, The Manchester Museum and from the Faculty of Life Sciences.

This exposure places Manchester as a lead University in the multidisciplinary approach to science.

Dr Manning doesn’t stick to convention – or even his own discipline – on his perpetual quest to expand what we know about dinosaurs.

Dr Manning said: “it was a privilege to work with some of the worlds top scientists from multiple disciplines, all to help unlock secrets locked in the sands of time.

“This series is not just about palaeontology, although dinosaurs are clearly an important theme.

“The series explores many new techniques in the earth, physical and biological sciences, from proteomics to particles physics, and from locomotion to geochemistry.

“The series would not have been possible without the support and collaboration of many scientists at The University of Manchester, and the staff of the Manchester Museum.”

Dr Roy Wogelius, a geochemist in the School of Earth, Atmospheric & Environmental Sciences, was a key contributor to the series.

Dr Wogelius said: “An important part of this series is to show how cutting-edge technology has allowed us to push back the boundaries of what chemistry can reveal about such ancient organisms.

“People will be surprised to learn not only what we know about dinosaurs, but how we know it. In a very real way, these programmes put some supremely interesting new flesh onto some very old bones.”

With unique access to some of the world’s most sophisticated technologies – from crime scene 3D mapping technology to a particle accelerator that generates a beam of x-rays one million times stronger than a chest X-ray – Jurassic CSI challenges long-held assumptions and poses radical questions about our understanding of dinosaurs.

The series takes Dr Manning and his team from North to South America and then across Europe to China.
Working on some of the rarest fossils know to science, the team was able to apply their 21st Century science to some of the oldest collected fossils in the science of palaeontology.

The pioneering palaeontologist and his team are well-known for their research work on the hadrosaur Dinomummy, helping Velociraptor climb-up upon its prey, aiding dinosaurs to ‘virtually’ walk, scanning Archaeopteryx with particle accelerators and tracking the enigmatic T. rex in the Badlands of Montana.