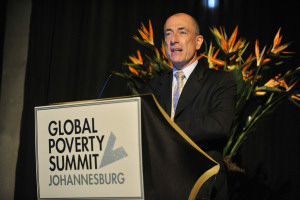 This call to action was made by participants at the inaugural Global Poverty Summit, held in Johannesburg, South Africa 16-19 January.

Nobel Laureate Professor Joseph Stiglitz, is Chair of the Brooks World Poverty Institute, University of Manchester and the organisers of the Summit.

He said: “The Doha Development Agenda negotiations started a decade ago but they have yet to bring any meaningful contribution to reducing poverty.

“It is time to bring the talks to a close. Successfully doing so requires courage and sacrifice by the rich countries. They’ve got to accept that they are going to have to pay for the change.”

Bringing together more than 50 of the world’s best minds to critically interrogate the role of global institutions in poverty reduction, the Summit’s objectives were to address global poverty by impacting on the MDGs and the World Trade Organization’s (WTO) Doha Development Agenda.

The summit heard how significant progress has been made in reducing global poverty since the Millennium Development Goals (MDGs) were agreed in 2000.

But, they say, much remains to be done: more than one billion people suffered from hunger last night – posing the question how something like that can happen in an affluent world.

A central proposition of the Summit is that governments must be key players in the global economy not sideline players in a world of unfettered markets. “No industrial country got to where it is today without significant state intervention,” says Rorden Wilkinson, Research Director at the Brooks World Poverty Institute. “Global trade negotiations need to recognise this reality.”