Astronomers have shown how gravitational lensing allows us to see the faintest and most distant galaxies, helping us to understand the origin of the Universe. 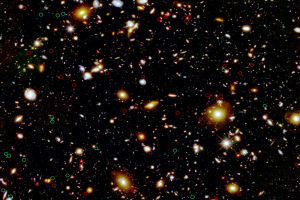 The first gravitational lens, a phenomenon in which light from a distant object is bent around a massive foreground object, was discovered in 1979 by a team led by Dr. Dennis Walsh from The University of Manchester’s Jodrell Bank Observatory.

Since then, astronomers have used gravitational lenses in many ways, including studying dark matter and as “Nature’s Telescope” to investigate galaxies in the distant universe.

They argue that gravitational lensing makes faint sources more visible and this effect may be even more important than originally thought when looking at distant galaxies.

Acting like a cosmic magnifying glass, gravitational lensing brings into clearer view galaxies which would otherwise be beyond the reach of even the largest telescopes.

Professor Mao said: “The magnifying effect of gravitational lensing gives us a much better chance of seeing very distant objects in the universe, otherwise too faint to see, and study them in far greater detail.”

In their Nature letter, Professor Mao and his colleagues suggest that our measurement of the brightnesses and numbers of very distant galaxies is likely to be significantly distorted by the magnification caused by individual foreground galaxies much closer to us.

But the exact ratio of numbers of magnified and unmagnified distant galaxies depends on various factors which astronomers are currently not certain about.

Professor Mao added: “Next-generation telescopes such as the James Webb Space Telescope, due to be launched in 2014, will be able to determine this effect more precisely.

“By studying these extremely distant objects we can see far back in time. We aim to exploit the magnifying effect of gravitational lensing to reveal how galaxies like our own Milky Way emerged from the early Universe.”