Planck unveils wonders of the Universe

The first scientific results from Europe's Planck spacecraft featuring the coldest objects in the Universe have today been released. 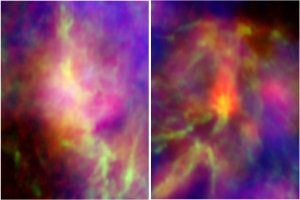 Astronomers at The University of Manchester’s Jodrell Bank Observatory played a key role in the worldwide teams searching for an exciting variety of astronomical finds, from massive galaxy clusters to new, unidentified objects.

Observing both our Galaxy and emissions from the distant reaches of space, Planck is a flagship mission of the UK Space Agency, which funds the UK's involvement in both of Planck's scientific instruments.

Astronomers from around the UK are now heavily involved in the operation of Planck's two scientific instruments and in understanding the images and data it is now producing.

Dr David Parker, Director of Space Science and Exploration for the UK Space Agency, said: "We're proud to be playing a key role in this amazing discovery machine.

“These new results are all vital pieces of a jigsaw that could give us a full picture of the evolution of both our own cosmic backyard – the Milky Way galaxy that we live in – as well as the early history of the whole Universe."

The routine phase of Planck's mission began on 13th August 2009. The observatory's primary goal is to image the Cosmic Microwave Background, the afterglow of the Big Bang, but to do so it must look through the rest of the Universe.

Whist scanning the whole sky, Planck detects emission from our own Galaxy, the Milky Way, as well as from other galaxies. It does not see stars, however, but the gas and dust from which the stars are born, and which they create when they die.

Dr Clive Dickinson, from The University of Manchester, said: "We are now becoming rather confident that the anomalous emission is due to nano-scale spinning grains of dust, which rotate up to ten thousand million times per second. This is a great result made possible by the exceptional quality of the Planck data."

One of the advantages of Planck's broad wavelength coverage is that it can detect very cold dust both within our Galaxy and beyond. Cold clumps of dust in our Galaxy, of which Planck has found over 900, represent the first stages of starbirth.

Additionally, a survey of around 500 galaxies within a few billion light years has shown that some of them contain much more cold dust than previously thought.

Dr Althea Wilkinson, from The University of Manchester, added: “We could hardly imagine this point when we were building amplifiers for the Low Frequency Instrument at Jodrell Bank more than five years ago.

“It is fantastic to have reached the stage where we see real science emerging."

Planck continues to survey the Universe. Its next data release is scheduled for January 2013 and will reveal the cosmic microwave background in unprecedented detail, the opening act of the cosmic drama, a picture of the beginning of everything.