The University of Manchester’s Sustainable Consumption Institute is to host Nobel Prize winner Professor Tom Schelling who is to deliver its annual lecture today (21 October). 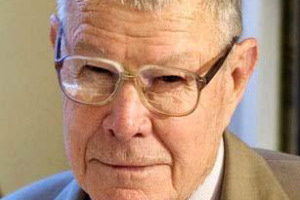 Taking place at the Midland Hotel in Manchester, he will discuss ways in which countries can mitigate the effects of climate change.

Entitled ‘Climate Change: The Missing Institutions’, the lecture will mark the start of an SCI workshop – ‘Climate Change and Common Sense’ attended by  leading economists.

Discussing measurable actions and economic principles for climate change, the workshop will be held over a two day period, starting today and running until 22 October.

Professor Schelling, who yesterday received an honorary degree from The University of Manchester, will also be co-writing a book to coincide with the workshop.

Based on the paper he delivers at the lecture plus the papers delivered and discussed at the workshop, the book will be produced by Oxford University Press with contributions from each of the workshop’s 23 participants.

Professor Schelling received the Nobel prize for Economics in 2005.

He has made important contributions to areas including game theory, nuclear arms policy, conflict resolution, alcohol and drug addiction, segregation and global warming.