The construction industry could be devastated by a short-term over-reliance on migrant EU workers because of a lack of skills training, a new publication warns. 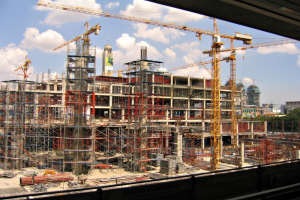 Major building projects, such as the 2012 Olympics, rely heavily on migrant labour, which has led to strong criticism from trade unions and British workers.

A shortage of skilled British workers is due to the absence of an adequate education and training scheme and poor labour market regulation, according to University of Manchester academic Dr Paul Chan, working with Professor Linda Clarke at the University of Westminster and Professor Andrew Dainty from Loughborough University.

The transient nature of construction work has meant there is little incentive to provide a well-funded, comprehensive vocational education and training (VET) system.

Many other European states have strong VET and apprenticeship programmes that produce workers with a broad range of skills.

Workers trained in Britain, however, tend to be ‘single-skilled’. According to the publication, European workers may be preferred for their flexibility and their broad-based skills – even though they may often be classified as less skilled and thus paid at lower rates.

Their availability is currently providing a ‘short-term fix’ for the industry’s problems but is also reinforcing employers’ reluctance to provide alternative training for British workers.

On big building sites especially, the ‘bogus’ self-employment of migrant workers is a problem.

Such situations can result in exploitative hours and pay, and workers forgoing benefits they would be entitled to as a direct employee.

Above all, it acts as a disincentive to train and to innovate in an industry desperate for both.

The UK construction industry has come to rely on ‘poaching’ labour trained and educated at considerable expense elsewhere, in particular in the east European countries, argues Dr Chan and colleagues in the book ‘Who needs migrant workers?’ by Martin Ruhs and Bridget Anderson.

In a chapter written by Dr Chan and his colleagues, they claim an improved VET system should be central to any policy attempt to ‘manage migration’.

Dr Chan, from the School of Mechanical, Aerospace and Civil Engineering, said: “The project-based nature of the construction industry promotes the use of a transient, casual, and self-employed workforce, which erodes the incentive for employers to invest in training.

“We need to develop an improved and comprehensive VET system, supported with measures to manage the integration of migrant workers into the sector and to regulate the labour market. These would keep the industry strong and ensure a solid skills base for the future.”

“It has been shown in other European countries that, managed effectively, migrant workers can be a force for positive change.”

“The fact that many migrants have considerable knowledge and expertise is likely to be critical in establishing an effective VET programme.”