A graduate from The University of Manchester has won a silver medal at the Commonwealth Games. 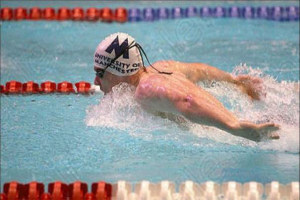 Mike Rock, who graduated from the University in the summer, finished second in the men’s 200m Butterfly final.

Finishing closely behind South Africa’s Chad Guy Dertrand le Clos, with a time of 1 minute 57.15 seconds the talented swimmer achieved his first ever medal at a major tournament.

Rock said:  “I think it's been a great year in two ways, I've finished my degree and I've managed to come here and put in a great performance at a major meeting.  It's my first medal so it's a real positive looking forward to next year and hopefully I can get some good training behind me now and we'll see great things in the future.”

Awarded a University Sports Scholarship to study at Manchester, Mike is no stranger to competing at the highest level.

In 2007 the Law student represented the University at the World Student Games held in Bangkok, finishing fourth in the 200m Butterfly with a world class time of 1 minute 57.98 seconds.

He came equal seventh at the Rome World Championships in summer 2008, a tournament in which the graduate battled American legend Michael Phelps, who took gold – one of five he collected in the Italian capital.

Training with Stockport Metros under world renowned coach Sean Kelly, Rock took a year out of his studies to reach the Beijing Olympics, helping the GB squad to finish sixth in the 100m medley relay, setting a new British record of 3 minutes 33.69 seconds.

In 2009 cheered on by his home crowd, he produced the race of a life time when he stormed to victory over Phelps, the world’s greatest ever swimmer, beating him by a body length at the ‘Dual in the Pool’ Manchester Aquatics Centre.