Vice President for Research will leave Manchester in October 2009 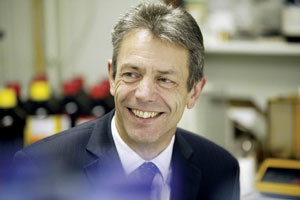 Professor Simon Gaskell, Vice-President for Research and Director of the Michael Barber Centre for Mass Spectrometry, is to leave the University in October 2009 to become Principal of Queen Mary, University of London*.

Professor Gaskell joined UMIST as Professor of Mass Spectrometry in 1993, before becoming Head of Chemistry in 1999. He was closely involved in the merger of UMIST and the Victoria University of Manchester and became Associate Vice President for Research at The University of Manchester in 2004 and Vice President for Research in 2006.

Commenting on the announcement, Professor Alan Gilbert, President and Vice-Chancellor of The University of Manchester, said:

“We congratulate Simon on his new appointment which offers him the opportunity to lead one of London’s most prestigious higher education institutions, which has a growing reputation for the quality of its research.

“We also thank Simon for his leadership and commitment and the important role that he has played in establishing the research reputation of this University.”

“This is a significant new challenge for me, the excitement of which is set against the sadness in leaving Manchester after sixteen very eventful years. I can think of no better experience to prepare me for my new responsibilities than working with the talented and committed colleagues I have had in Manchester, who have shared a commitment to the highest standards in research and education.”

* Queen Mary, University of London is one of London and the UK's leading research-focused higher education institutions. Amongst the largest of the colleges of the University of London, Queen Mary's 3,000 staff deliver degree programmes and research across a wide range of subjects in the Humanities, Social Sciences and Laws, Medicine and Dentistry and Science and Engineering. Queen Mary was ranked 13th in the UK in the 2008 Research Assessment Exercise (RAE) according to the Times Higher Education.