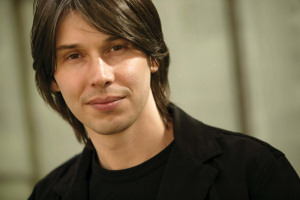 Television physicist and ex-rock star Brian Cox launched his first book with The University of Manchester’s award-winning scientist Jeff Forshaw at the Museum Of Science And Industry on 7 July.

Why Does E=mc2? (and why should we care?) is a groundbreaking journey into the real meaning of Einstein’s iconic equation, E=mc2. Raising lots of questions along the way – what is energy? what is mass? – the enthusiastic scientists take us to the site of the infamous 'big bang machine', the 27km Large Hadron Collider.

Brian Cox was in the band D:Ream: his last appearance with them was at the 1997 Labour party conference. He now splits his time between experimental physics in Manchester and the CERN labs in Geneva, Switzerland. He was also science adviser on Danny Boyle’s stunning film Sunshine. Jeff Forshaw, like Brian, is one of the youngest professors in the UK. He teaches Einstein’s theory of relativity to first year students.

The book launch was organised by Blackwell University Bookshop. It was also a trailblazer event for Manchester Science Festival, a fun-packed annual week of inspirational shows and workshops from 24 October to 1 November 2009.