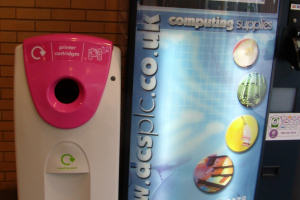 "Each year in Britain, we throw away 28 million tonnes of rubbish from our homes. This weighs the same as three and a half million double-decker buses. A queue of buses that long would go around the world one and a half times".

With summer just around the corner and students leaving their halls of residence, STARS has set up a reuse scheme, with the aim of reducing the amount of waste from halls that goes to landfill. Members of staff are also invited to donate unwanted items to the scheme, which will run until 25 June.

In addition, STARS will be recycling:

STARS is also promoting the recycling facilities across its three campuses for:

Collection points are being set up around the three campuses in Fallowfield, Victoria Park and City. For a list of the locations, please download:

This is part of a national campaign that many universities are joining to tackle the increasing culture of the 'landfill society'. The aim is to change the emphasis from waste to the three Rs:

The scheme which universities are adopting is called 'towards zero waste'.

If you would like more information on this scheme, feel free to email: