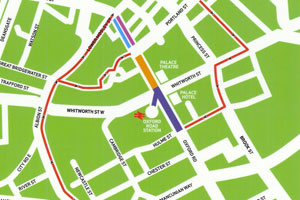 On Monday 18 May, United Utilities begins replacing the water pipes on Oxford Road and Oxford Street, which are more than 100 years old. Once the job is finished, there will be improved water quality and fewer leaks for generations to come. And they won't need to replace the pipes again for ages.

The work will be done in three phases over a period of three and a half months:

Phase 1: 18 May - 21 June
Between junction with Hulme Street and Whitworth Street for five weeks

Diversion routes will be clearly signposted and are shown on: