Building on the Manchester 2015 Agenda: Consultation

Comment on draft of new Strategic Plan by 24 April 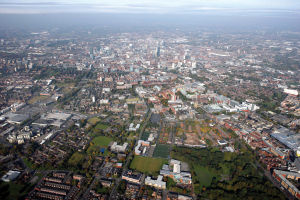 The Manchester 2015 Agenda, the strategic blueprint for positioning Manchester among the top 25 universities in the world by 2015, was adopted by the University at its inauguration in October 2004.

The journey from 2004 to 2015 is only at the half-way stage, but with the Key Performance Indicators (KPIs) showing that the Agenda is achievable, the University is beginning to look beyond 2015 to the challenge of maintaining strategic momentum in the long-term.

A draft version of a new Strategic Plan, which looks beyond 2015, has been prepared following preliminary consultation with senior managers across the University and is available as a pdf document online at:

This document will be the subject of a wide-ranging consultation amongst University staff over the next few weeks before a final version is submitted to the Board of Governors for their approval.

You are invited to comment on this draft via the Consultation meetings that will be held in Schools, Faculties and Directorates over the next few weeks or by completing the Response Form available online at:

The closing date for feedback is Friday 24 April 2009.