Robots built at The University of Manchester are preparing to roll into battle in a Ministry of Defence contest to find the best new British urban military technology. 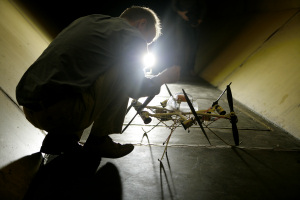 Now, after months of hard work and preparation, the Grand Final has arrived and the Manchester team is aiming to blast into contention for the top prizes.

After a year of intense development and testing, the Tumbleweed robots will be called into action on 16, 17 and 18 August, when they will be required to tackle an array of challenged tasks at Copehill Down in Wiltshire – a special 'FIBUA' (Fighting In Built Up Areas) army training centre.

The project development team, led by Dr Bill Crowther from the School of Mechanical, Aerospace and Civil Engineering (MACE) at The University of Manchester, has developed two sophisticated machines for the challenge; one that rolls along the ground and another that takes off and hovers like a helicopter.

The novel, low-cost and ultra manoeuvrable air vehicle is powered by the same type of batteries used on mobile phones. It incorporates a lightweight air frame and six helicopter rotors located at three different angles.

It is designed to seek out roadside bombs, weapons and armed militia and beam images back to base. Back at base, specially developed recognition software will allow the team to define a threat against a library rather than simply highlighting a possible threat in an image.

The air vehicle is autonomous – meaning it doesn’t need to be remote controlled – and can be pre-programmed using GPS technology to follow a course.

With the development of a structural shell, it will be able to roll along the ground and even up walls – greatly expanding the operational possibilities of the vehicle. It will also be able to land and take off from uneven ground and have the capability to perch and stare from suitable urban structures.

In a battle situation, it is envisaged that clusters of the air vehicles would be sent out together and work collaboratively to detect danger. Each robot would have a mass under 5Kg, be small enough to fit through a doorway and have the ability to operate for up to 20 minutes.

During the development of the air vehicle, the Tumbleweed team has developed a new kind of rotor technology – known as HexRotor – that should allow air vehicles to perform extreme manoeuvres in tricky urban conditions and varying weather conditions.

The design and development work in this area has resulted in a wide ranging patent on multi-rotor vehicles suitable for operations in urban environments. This patent will be exploited through a spin-out venture in partnership with the University of Manchester Intellectual Property Ltd (UMIP).

The Tumbleweed developed ground vehicle also offers a high level of manoeuvrability to navigate cluttered urban environments. It has three sets of wheels and each of these can be steered, enabling the vehicle to change directions, while still keeping the onboard surveillance camera pointing in the same direction.

Like the air vehicle, it is autonomous and navigates using GPS and pre-programmed co-ordinates. It also incorporates sonar sensors to avoid and skirt around unexpected obstacles.

Around one dozen robots will be put through their paces during the Grand Final, with around ten people from the Tumbleweed team having travelled to Wiltshire for the contest.

Team leader Dr Crowther says that while it usually takes several years and millions of pounds to develop these types of autonomous robots, the Tumbleweed team has developed a new class of helicopter flight vehicle from concept to first flight in under one year.

“The intention is that the robot is ultimately of sufficient low cost to be expendable,” he said. “We are looking to achieve this in part by keeping the advanced computing and image processing hardware back at the base station rather than on the vehicle.

“A key challenge is making the technology sufficiently autonomous that it does not require high levels of skill and attention to operate it.

“Current systems often take two or three specially trained soldiers to operate them and can’t be used by front line troops where the information is most needed.

“The military have an urgent requirement for surveillance support in urban environments and it’s likely they would deploy any new technology immediately if it was shown to be effective.”

Experts from the schools of Mechanical and Civil Engineering, Electronic and Electrical Engineering and Computer Sciences at The University of Manchester have created Tumbleweed in collaboration with the University of Leeds and with expert assistance from Manchester-based AV-i Ltd, MBDA and BAE Systems.

Tumbleweed was one of only six Grand Challenge entries to receive further funding from the MoD to develop the concept and technology further.

The winner of the competition will win the R J Mitchell Trophy, named after the ‘father of the Spitfire’ WWII fighter plane, and also further funding from the Ministry of Defence (MoD) to refine their design.