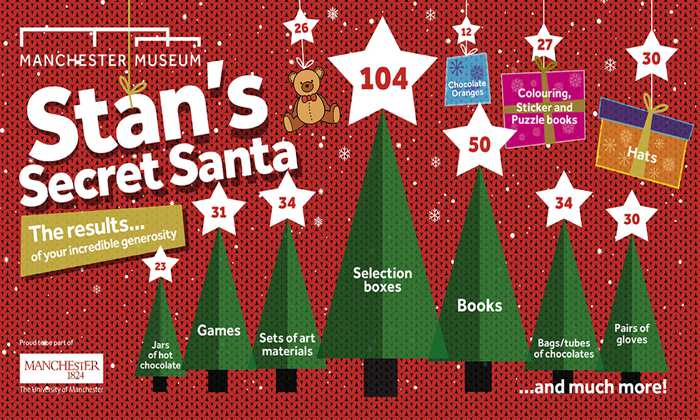 2021 has been a difficult year for so many already, and the preparations for Christmas have brought even more challenges for some.

On Tuesday, 7 December, Manchester Museum opened its Fossils Gallery for people to drop off gifts for 'Stan's Secret Santa', a Christmas Gift Appeal in partnership with Invisible Cities, with all donations directly supporting people experiencing homelessness and poverty. Stan the T.Rex came dressed for the occasion, sporting an enormous Santa Hat made and donated by the Museum's Artist in Residence, Lucy Burscough.

The Museum was overwhelmed by the generosity of local people, and Stan's Secret Santa was a roaring success.

The team carefully and lovingly wrapped the gifts ready for distribution by Greater Manchester homelessness and poverty support organisation partners, including:

The Museum would like to thank everyone who donated and made the campaign a success.