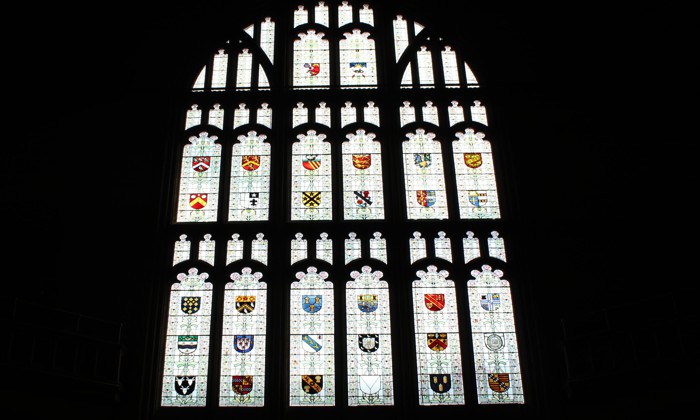 It’s the ceremonial heart of our University, where hundreds of graduation ceremonies and special events have taken place. But although thousands of people have walked through the Whitworth Hall, little was known about the history of the magnificent stained glass windows.

Grant Collier, who has regularly led tours around the Alfred Waterhouse-designed Whitworth Building, says he described the windows as bearing the ‘coats of arms of various textile towns’. Grant explains: “I realised that we didn’t have much information on the stained glass windows and I thought it would be a good idea to crowdsource support, particularly if people recognised the crests of their local area.”

“We posted images of the windows online to get people’s input, and we had a fantastic response. Contributions from our followers highlighted that ‘textile towns’ was not an accurate description – they pointed out that some were personal crests of people connected to the University.

The social media campaign gathered pace, and Grant adds: “Our Twitter followers managed to identify 24 out of 31 crests, but we were stuck on the remaining seven. I spoke to our University archivist Dr James Peters, who showed me some archive correspondence discussing the windows, which demonstrated that the stained glass was added gradually. The pieces were intended to showcase ‘early benefactors, Chancellors and the grant-giving towns’, cementing and displaying their relationship to the institution either through financial support or other activities such as holding important positions. The correspondence also told us that some significant figures such as Charles Beyer and Lord Morley did not have personal heraldry, so the architect Paul Waterhouse, who coincidentally was Alfred Waterhouse’s son, sketched bespoke designs for them.

“We found a plan of the windows, but it didn’t quite fit with what we had already identified. Clearly some of the crests had been shuffled around for some reason or other, and the original plan hadn’t been followed to the letter. Spaces were left blank for future chancellors, but we don’t know why the practice was stopped with one window remaining – although we did find a letter from 1924 discussing a potential addition to the window and a sketched annotation asking ‘can we afford luxuries just now?’, so perhaps it was purely a cost consideration!

“These documents filled in the details of some of the older personal crests of former Chancellors, but it only went so far, so we had one left to identify. The remaining crest was also identified by Dr Peters; seeing the pattern of former chancellors, he suggested it could be the crest of Lord Woolton, which was correct!” Lord Woolton was Chancellor of the Victoria University of Manchester from 1944 to 1966 and inventor of the wartime Woolton pie.

The crests for Rochdale, Burnley and Warrington were added in 1931. With the identification puzzle nearly complete, there were the final four left to identify on the side window. Says Grant: “Again with the help of our Twitter followers, we managed to identify this as the window added in 1939 to represent Preston, Blackpool, Stretford and Stoke.

“We’re keeping a record of the coats of arms on file for the future, and we can now explain far more about the crests than we could before – not just ‘textile towns’ at all, but a gallery of significant people and places in our University’s history!”

You can view more details of the stained glass windows on Twitter.

Top to bottom, left to right, the crests are as follows:

The Whitworth Building was designed by Alfred Waterhouse as the final, grand façade of the Old Quad. Alfred Waterhouse was one of the Victorian era’s greatest architects and, as well as the rest of the University’s Old Quad buildings, he produced neo-gothic works such as Manchester’s Town Hall and the British Museum in London.