Our books of the month from Manchester University Press

Our colleagues from Manchester University Press choose their favourite reads 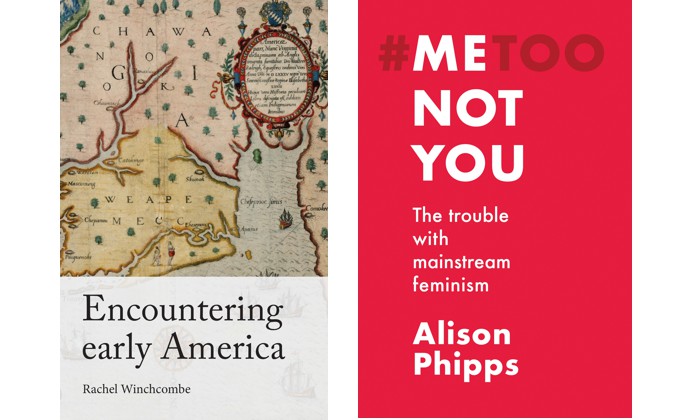 'Encountering early America' traces the history of England’s first century of encounters with America. It is the first major study that systematically and comprehensively analyses English encounters with the New World in the sixteenth century and their impact on early English understandings of America and changing approaches to exploration and settlement. The book traces the dynamism of early English encounters with the Americas and the many cultural influences that shaped English understandings of the new lands across the Atlantic.

Chris Hart, Head of Marketing at Manchester University Press, says: "For someone with a degree in American literature, this book was a joy to read and acted like a gateway to my past and a period of studying I really enjoyed, opening up a panoramic view of early life of the settlers in America, as well as diving deeper into the smaller details of everyday life. It is fascinating to read and to balance what life was like then in America to the rollercoaster of the last few years."

'Me, not you: the trouble with mainstream feminism' by Alison Phipps, Professor of Gender Studies, University of Sussex

This book presents a challenging critique of #MeToo and similar Anglo-American campaigns. These campaigns are dominated by self-described ‘nasty women’, who refuse to be silent and compliant and who name and shame perpetrators in the media. These women also tend to be privileged and white. Alison Phipps argues that mainstream feminism filters righteous anger about gender inequality through race and class supremacy. This turns ‘me, too’ into ‘me, not you’: an exclusive focus on white women’s pain and protection. It is also a short step from sacrificing marginalised people to seeing them as enemies, which happens in campaigns against the sex industry and transgender inclusion. In this reactionary feminism, ‘Me, not you’ refers to hoarding resources, policing borders and shutting doors.

Chris Hart adds: "I got a lot out of reading 'Me, not you', and it helped broaden my understanding of feminist campaigns and both the history and struggles of marginalised groups. It is written in an accessible, engaging way, and I read the book in one sitting. I can’t recommend it enough and I was delighted to see it reviewed in the likes of the TLS, The Spectator, gal-dem and The F-Word, with Mona Eltahawy hailing it as ‘a book I will be carrying everywhere, eager to share, excited to have Phipps' words fighting alongside me.’ What better way to sum up this powerful book."

Manchester University Press was founded in 1903, primarily to publish research being carried out at the Victoria University of Manchester. It quickly expanded over the following decades, and now publishes over 200 new books a year. With changes in academia and publishing over the last 20 years, MUP was an early adopter of producing electronic editions and digital collections.