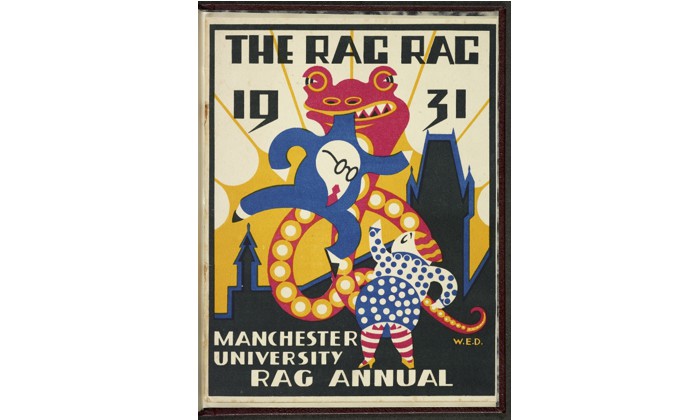 The Oxford English Dictionary states that the origin of the word "Rag" is from "An act of ragging; esp. an extensive display of noisy disorderly conduct, carried on in defiance of authority or discipline". Early Rag collectors may have 'ragged' passers-by until they made a donation.

Rags have a long, if vague, history. Shrove Rag was an annual Students' Union event, held on Shrove Tuesdays, which combined charitable collecting with high-spirited, sometimes controversial, revelry. Rag events at Manchester can be dated back to 1887, making us something of a pioneer of such activities. Originally they were largely convivial events, which involved ‘ragging’ performers at matinee performances in local theatres and music halls.

From the 1920s to the 1980s, Rags had a different programme of events, including float processions, distribution of a Rag magazine and a revue. It was further enlivened by unofficial events, some of which led to complaints being made to the University authorities. In the 1960s, stunts included testing how many students could fit into a telephone kiosk or car, or on to a beer barrel.

Manchester's 'Rag Rag' magazine was first published in 1924. The 'Rag Rags' contained jokes and humorous stories, some of them politically incorrect or offensive. The magazines also contained adverts produced by Manchester students for local businesses. The early magazines were notable for their bright covers, adorned with an illustration which sometimes incorporated the snake and sun from the University's then coat of arms. The scurrilous nature of the Rag Rag occasionally attracted criticism, but it proved to be an effective means of raising money for charities. The image shown is the front cover of Manchester's 'Rag Rag' from 1931.

Traditionally, Students' Union fundraising activities have centred on an annual RAG Week. Nowadays, while some Rags are only active for this week, other universities have seen RAG Week evolve to encourage charitable fundraising for the whole year.

Much more recently, backronyms have been invented for RAG to stand for 'Raise and Give', 'Raise A Grand' or 'Raising and Giving' at universities across the UK. Manchester's Students' Union Raise and Give campaign sees a different charity each year benefit from fundraising - the latest was Alzheimer's Research UK.

Before the formation of the National Health Service, RAG played an important role in raising money for Manchester’s voluntary hospitals, such as the Manchester Royal Infirmary. In later years, RAG raised money for a range of medical charities.

The image above is just one of many from our University's archives of records and documents which tell the story of our University's history and heritage. Some of these are available to view online through our digital collections.