Our staff and students have been recognised for their role in helping to establish the Alderley Park Lighthouse Laboratory in Cheshire, a key component of the Government’s COVID-19 testing programme 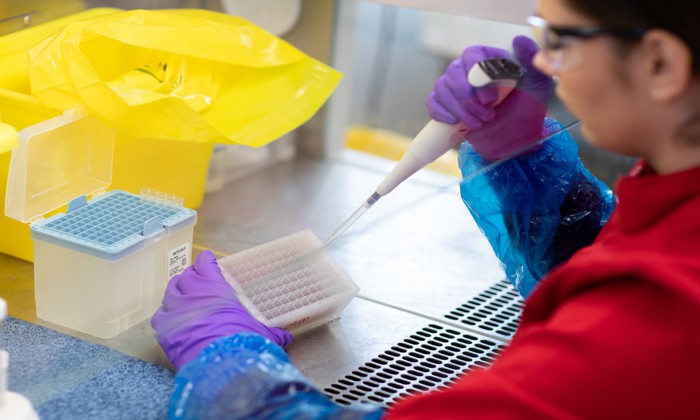 The Alderley Park Lighthouse Lab is one of several government super-labs across the UK, which forms the Lighthouse Lab network: the largest diagnostics network in UK history. At the end of October, the network had the combined capacity to process half a million tests samples each day.

The Alderley ‘super-lab’ required an army of scientifically-trained volunteers to help increase the UK’s Covid-19 testing capacity when the site was created in March 2020.

Dozens of our staff and postgraduate research students across the campus offered up their expertise and services.

Nearly a year on, the lab has processed its 7 millionth sample, and following the call for volunteers, has subsequently provided industry placements for 14 of our undergraduate students.

Mark said: “We were astounded by the sheer number of volunteers who stepped forward at the start of the year to dedicate their time and energy towards a common goal; how the application of technology and science can contribute towards the eradication of the terrible pandemic we’ve all had to endure this year.

“Over 1,000 individuals from all walks of life answered the call and within a few short weeks, we were operational. Following the launch, we’ve had a great deal of these volunteers join the team as full-time staff.

“Today, nearly 600 staff members can sample up to 50,000 tests a day, and we’ve just processed our 7 millionth sample. It’s a tremendous figure, but one that would have been impossible were it not for the tenacity and hard working ethos of our volunteers and wider team.”

Several University of Manchester placement students, including Iona Glidden, Joseph Turner and Anjali Sivaram, recently gave a presentation about their experiences working with the Alderley Park team throughout the pandemic.

Iona commented: “We received a lot of virtual applause from the staff members at the University, who found the talk very interesting and informative.”

Anjali said: “They were very proud of all their students who are contributing to the national effort against COVID."

And when asked about how they found the work at the Lighthouse, Joe concluded: “it is a privilege to be on the frontline for one the most difficult time periods of our generation.”