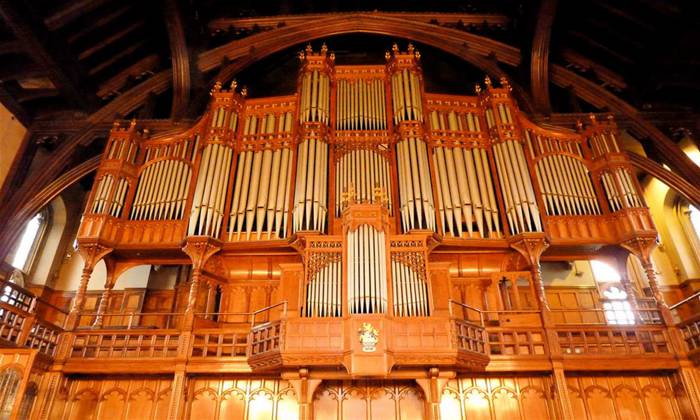 When Jonathan Scott played the Whitworth Hall organ one evening in 2018, filmed by his brother Tom, little did they know that their film would become a YouTube hit reaching a worldwide audience. Jonathan's arrangement and performance of JS Bach's 'Air on the G String' has since been viewed more than 3,021,550 times on the social media platform.

Jonathan is an accomplished musician for the Bridgewater Hall and Royal Northern College of Music (RNCM). Together with his brother Tom they also perform as the Scott Brothers Duo, both here in the UK and at major festivals around the world. Tom studied music at Manchester, following his undergraduate studies with a Masters degree and a PhD in electroacoustic composition. They have recorded several CDs on their own label to great critical acclaim.

Tom, who is also a keen animator, directed the film and sound of Jonathan's performance, which also included Gigout's Grand Choeur Dialogue.

Many staff members will be familiar with the grand setting of Whitworth Hall, but the organ is rarely noticed by the casual observer. It was built by Henry Willis II in 1902, and rebuilt by JW Walker & Sons Ltd (1962/69), before David Wells Organ Builders Ltd reconstructed it in 2014. It is usually played at our graduation ceremonies and civil weddings.

Recalling his 2018 performance, Jonathan says: "The sound in the Whitworth Hall is fabulous and it's a very exciting instrument to play. I didn't realise that the Bach film would become quite so popular. The combination of the beautiful architecture and the wonderful sound of that organ seems to have captured the imagination of people all over the world. It's great to see that the comments on the video are so positive and from people in every country around the world.

"People often see these huge impressive organs which are the single largest architectural feature of a large hall without often realising that they are superb musical instruments capable of creating a variety of sounds which are like a full symphony orchestra.

"We wanted to bring this instrument to a wider audience and so, hopefully, this has done the job!

"My brother and I are both from Manchester, and have strong ties to the city and we are really proud to showcase Manchester's great cultural treasures."

The brothers have also been giving free online concerts since lockdown began on their YouTube channel with over 300,000 views so far.