Celebrating the 75th anniversary of the Fifth Pan-African Congress

Taking place in October 2020, we are pleased to announce a tripartite University Initiative celebrating the 75th anniversary of the fifth Pan-African Congress that took place in Manchester in October 1945 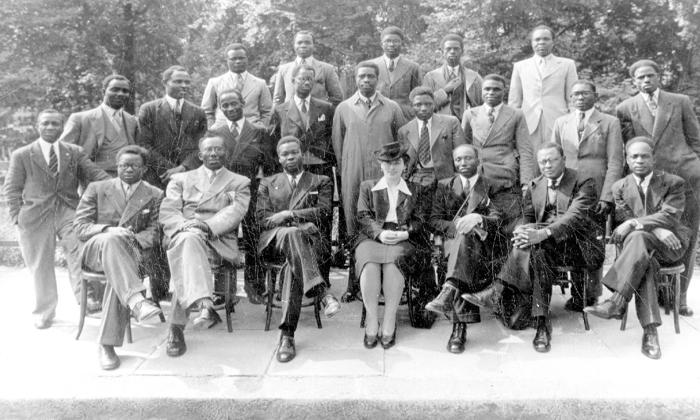 Despite being much forgotten within our city, this was a critically significant event that played a key role in the shaping of modern world history. It was the first time after World War 2 that emerging Africans took on the leadership of the struggle, to demand self-rule and freedom from British colonialism, supported by allies from across the world.

The plaque commemorating this event is sited in the recently rebuilt MMU Arts Faculty Building facing onto All Saints Square in what had previously been Chorlton Town Hall where the six-day event had actually taken place. The congress had 200 attendees from across the world; including delegations from Africa, America, the Caribbean and Asia, as well as Black and White delegates from Manchester and across the UK.

A number of future independent African leaders were delegates at the Congress, including Kwame Nkrumah, Nnamdi Azikiwe and Jomo Kenyatta. The Congress provided a forum which would be a springboard for these key figures in connecting with each other and developing new national strategies towards hastening decolonisation and ultimately self- rule. The black American civil rights activist and sociologist Du Bois, past organiser of the previous Congresses, attended as a delegate, whilst the writer Peter Abrahams represented pre-apartheid South Africa.

The Manchester 1945 meeting was a precursor to the development of a number of African independence movements which went on to successfully secure self-rule for countries across Africa. It also signified the movement of the intellectual discourse on African self- realisation and solidarity with other causes moving from the Americas and the West Indies to the UK and then on to Africa. Joe Appiah, the representative of the West African Students Union in the UK went on to play a key role in Ghana’s independence working directly with the nation’s first premier Kwame Nkrumah. His son Professor Kwame Anthony Appiah is one of the leading philosophers in the world and we are delighted to be hosting him in the marking of this anniversary, where he will be delivering a keynote lecture.

The demands for self-rule and decolonisation that were tabled at the Congress in 1945 are not far away from the Black Lives Matter protests that we are evidencing today. Our University campuses are also included in this movement. It is significant that the opening session of the Congress focused on the ‘Colour Problem in Britain’. We feel this anniversary comes at a critical time in our history and allows us to reflect on Manchester’s role in its support of the freedoms of the oppressed.

We are particularly excited to be hosting this 75th anniversary event in association with colleagues from the universities of Manchester and Salford, echoing the solidarity formed across various peoples and nations of the Manchester Congress. In these extraordinary times the celebrations will take place online with plans to have socially distanced events across the three University Greater Manchester campuses over the second weekend in October.

A sixth form conference, organised by MMU, will take place on Thursday, 15 October, followed a day later by a series of city-based activities culminating in a keynote talk by Professor Kwame Anthony Appiah.

On Saturday, 17 October we are planning conversations with academics with connections to Manchester that will take place at a number of physical venues and be relayed live digitally.

We will have interactive coverage of events throughout the weekend using various digital media, and participation in all public events will be free to all. We invite you to join us and get involved in this momentous celebration that both celebrates the past and also importantly supports the Black Lives Matter agenda by publicly celebrating Black history and also providing a set of public events and forums through which to connect this with contemporary struggles.